It’s all about habitat! 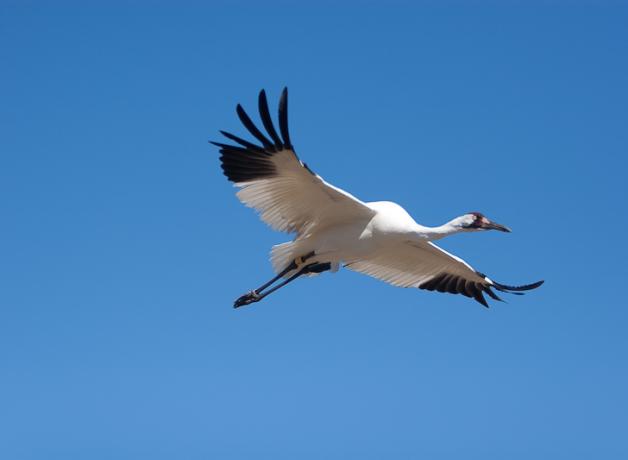 At one time, only 15 Whooping Cranes remained in the world. Today, the species remains endangered, but its population has increased to nearly 600 birds, thanks to conservation efforts. George Archibald, co-founder of the International Crane Foundation, explains how we can improve conditions for Whooping Cranes: “It’s all about habitat,” he says. “I think that’s the fundamental thing.” Saving the areas where Whooping Cranes live, and protecting them from the negative impacts of human activity, will help the cranes recover and thrive.

At one time, only 15 Whooping Cranes remained in the world. Today, there are still fewer than 600. George Archibald, is co-founder of the International Crane Foundation. We asked him what challenges Whooping Cranes – and cranes around the world – face.

“It’s all about habitat. I think that’s the fundamental thing. If we can save these last great areas where the birds live, so that they’re not negatively impacted by the actions of man.”

To thrive, cranes require grasslands, and wetlands. In this way, cranes are ambassadors for the conservation of these habitats. George explains:

“The general public can often take a great interest in helping the cranes because the size and beauty of cranes are very compelling and people know them. If you can conserve what the cranes need, everything else is benefitting.”

And cranes need safety when they fly.

“We’ve had a lot of our Whooping Cranes shot in our new experimental populations in Louisiana and in the Southeast. And now in Africa, trade has become a very ugly problem, whereby the cranes are captured and sold to wealthy people to decorate their estates in China and the Middle East. Hundreds of them…”

Check out more BirdNote shows featuring George Archibald:Read BirdNote’s blog post about the 2014 Whooping Crane FestivalVisit the International Crane Foundation onlineLearn about threats to the Whooping CraneWhooping Crane – More at All About Birds