Rachel Carson and the Veery

A plain bird with a beautiful song...

Rachel Carson, author of Silent Spring, and her beloved friend Dorothy Freeman shared a love of nature… and especially of one particular bird: the Veery, a type of thrush. Plain looking as it is, the Veery has a particularly beautiful song.

This story was based on the scholarship of Lida Maxwell. She wrote about Carson and Freeman in the paper Queer/Love/Bird Extinction: Rachel Carson's Silent Spring as a Work of Love, published in Political Theory.

Rachel Carson and the Veery

Liza Yeager: This is BirdNote.

Rachel Carson, the author of Silent Spring, had a really serious relationship with a woman named Dorothy Freeman. They wrote love letters to each other. And in those  letters, they wrote a lot about one bird that became really special to them: the Veery, a type of thrush. The Veery is pretty plain-looking, but it has a particularly beautiful song.

Liza Yeager: Hearing that song — and hearing it together — became kind of a quest for them. Here’s an excerpt from one of Carson’s early letters to Freeman.

I think it is quite possible for you and me and the Veeries to be together in some magical time and place next June.

Liza Yeager: Carson and Freeman lived many states apart. But the Veeries brought them together, despite the distance.

Liza Yeager: You can hear the full story about Rachel Carson’s love for Dorothy Freeman and the Veeries on our new podcast, BirdNote Presents. Search for it in your podcast app, or find it at our website, BirdNote.org. I’m Liza Yeager. 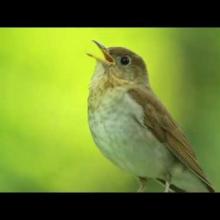 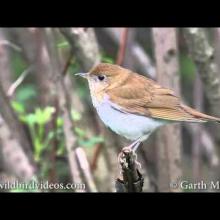