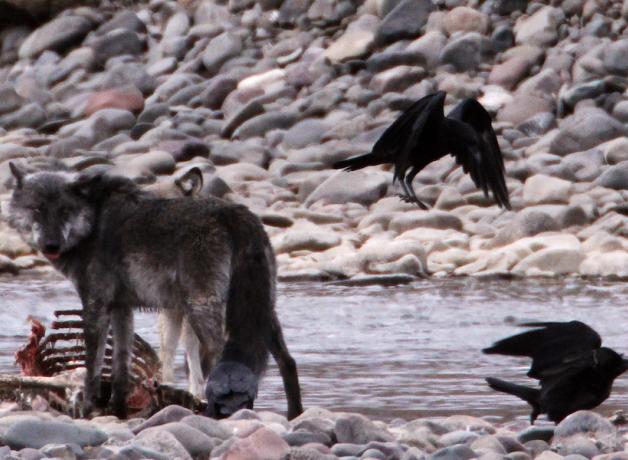 Researcher Bernd Heinrich writes: "Ravens associate with any animals that kill large game - polar bears, grizzlies, wolves, coyotes, killer whales, and humans." These birds travel with caribou on their migration, and scavenge remains after wolves have made their kills. The bill of the Common Raven can't cut into a carcass, so a large carnivore must tear through the tough hide first.

This is BirdNote!
[Common Raven calls –an assortment of call types through the script]
The raven – its voice is unmistakable [Common Raven calls] – held a prominent place in the myths of many cultures, from the Vikings to the tribes of the Northwest Coast, across the entire Northern Hemisphere. Today, ravens are the fascinating subjects of scientific study. [Common Raven calls]
Raven researcher Bernd Heinrich writes: “Ravens associate with any animals that kill large game – polar bears, grizzlies, wolves, coyotes, killer whales, and humans. … In the Arctic, … native peoples know when the caribou arrive on their migrations, by the announcements of ravens who travel with them and feed on the kills of the wolves along the flanks of the herds.”* [Gray Wolves howling]
Ravens quickly took advantage of the reintroduction of wolves to Yellowstone National Park in the 1990s, joining them to scavenge at kills. Curiously, ravens seemed to avoid animal carcasses when wolves were absent. One explanation is that the raven’s bill can’t cut into a carcass; a large carnivore must tear through the tough hide first. Some believe the bond between ravens and wolves runs deeper. Perhaps ravens even help lead wolves to their prey. [Common Raven calls]
Learn more about ravens at BirdNote.org. I’m Michael Stein.
###
Common Raven audio provided by The Macaulay Library of Natural Sounds at the Cornell Lab of Ornithology, Ithaca, New York. Recorded by G.A. Keller.
Gray Wolves howling recorded by John Kessler, Kessler Productions
Producer: John Kessler
Executive Producer: Chris Peterson
© 2012 Tune In to Nature.org     October 2016/2020     Narrator: Michael Stein

Read the article: Are ravens responsible for wolf packs?Check out this amazing photo of wolves and ravens, on a killLearn more about wolves at Wolf.orgCommon Raven - More at All About Birds