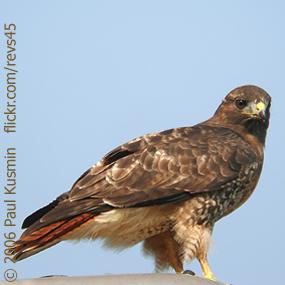 The Red-tailed Hawk is the most common and widespread hawk in North America. Red-tails often perch on fence posts in rural areas or even atop lights along the roadway. Watch for a large, bulky, football-shaped bird with a small dark head and a rusty-red tail. These hawks visit open fields to feast on the abundant populations of rodents and wintering shorebirds.

If you'd like to help support BirdNote with a gift, begin here.

Like to make a gift to BirdNote? Begin here.Learn more about the Red-tailed Hawk at All About Birds