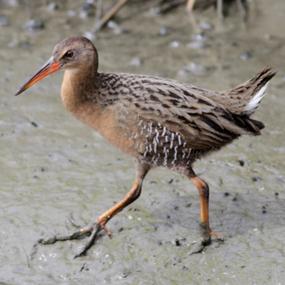 In a salt marsh near San Francisco, a loud clatter erupts from the dense vegetation. These jolting notes, like a small engine cranking up, are the voice of a Ridgway’s Rail.

The secretive bird peeks out from the edge of the marsh grass. First, the long red bill appears, followed by the cinnamon-colored breast and white striped flanks. The rail takes a step forward on long yellow legs, revealing a stubby, upturned tail. Picture a slim, tawny chicken – but with the bill and legs of a sandpiper, and a singular voice to match its eccentric appearance.

Once abundant around San Francisco Bay, the Ridgway’s Rail — formerly known as the California Clapper Rail — is today endangered. In the 19th Century, unregulated hunting plundered the species. In the 20th Century, rampant development reduced salt marsh habitat by 85%.

But in the 21st Century, the Ridgway’s Rail has allies. Restoration is under way to increase healthy saltmarsh habitat for the scarce birds. Also, efforts to control the number of predatory cats are improving the chances for the Ridgway’s Rail to survive.

[The calls of several Ridgway’s Rails]

You can see photos of this bird when you come to our website, BirdNote.org.

Check out this story about Ridgway’s Rail from KQED ScienceRidgway’s Rail – More at Audubon’s Guide to North American BirdsLearn more about the splitting of species by the American Ornithologists’ UnionCheck out this photo blog of the USGS capture & study of the rails!Here's more about Clapper Rail conservation...Clapper Rail - More at All About BirdsSan Francisco Bay named Ramsar "Wetland of International Importance!" 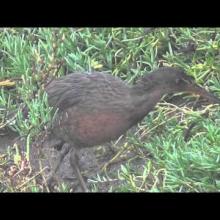 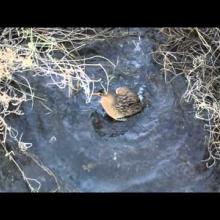 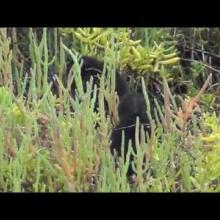