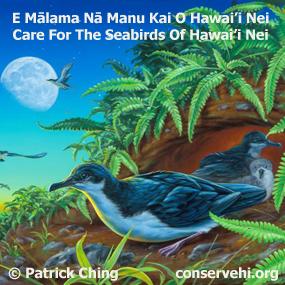 On Diamond Head on Oahu, Hawaii, on a vacant lot in the middle of an exclusive neighborhood, Wedge-tailed Shearwaters are nesting. The nesting success of shearwaters - including the Newell's Shearwaters seen here - has been greatly reduced on all of the main Hawaiian Islands. But Carolyn Blackburn helped save the Diamond Head colony. And another neighbor purchased the lot and dedicated its care to a conservation organization. Learn more about the project at the Conservation Council for Hawai'i. There's more about the shearwaters at the Bishop Museum.

This is BirdNote.
[A welcoming phrase or two of distinctly Hawaiian guitar music]
Ah, Hawaii. Imagine wiggling your toes in the warm, white sand of Waikiki.
[Music and waves on the beach]
Behind you rises Hawaii’s celebrated landmark, Diamond Head, an ancient volcano, also the scenic backdrop to some extremely pricey real estate.
Here, on a vacant lot with an ocean-view smack in the middle of an exclusive neighborhood, seabirds called Wedge-tailed Shearwaters are nesting.
[Wedge-tailed Shearwaters wailing]
Wedge-tailed Shearwaters are dark, gull-sized seabirds with spooky voices.
They’ve had a tough go.  The shearwaters are no match for a cat on the loose, or a developer’s bulldozer. [Bulldozer engine revving up] Their nesting success has been greatly reduced on all of the main Hawaiian Islands.
One dedicated resident, Carolyn Blackburn, stepped in to help save the Diamond Head colony. She spoke with neighbors about the birds’ plight, trapped feral cats, helped fence the nesting area, even cared for injured birds in her home. Carolyn’s example prompted another neighbor to purchase the lot where the birds nest and dedicate its care to a conservation organization.
Carolyn Blackburn says, “I’m a changed person since I became aware. I’m not a scientist but I saw that the birds were being decimated and I decided to do something about that.”
[Calls of Shearwaters followed by the Hawaiian guitar music]
Learn more at birdnote.org.   Mahalo.
###

Conservation Council for Hawai'iLearn more Wedge-tailed Shearwaters at hear.orgMore about Shearwaters from the Bishop Museum