Scott Sees a Peregrine Shoot across the Sky 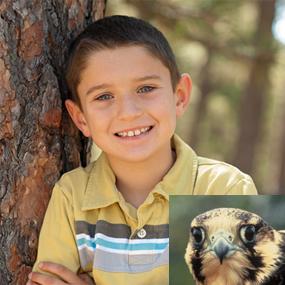 Scott Brizic, a fifth grader at School in the Woods in Colorado Springs, describes a recent encounter with a Peregrine Falcon: “One day as I sat down outside for lunch, I saw a Peregrine Falcon shoot across the sky . . . I saw it for a split-second, for it was going 200 miles an hour.”

Scott Sees a Peregrine Falcon Shoot Across the Sky

“One day as I sat down outside for lunch, I saw a Peregrine Falcon shoot across the sky! [Call of Peregrine Falcon] Its curved wings threw it higher than the trees, its head pointing forward, telling me it was not searching for prey.

I saw it for a split-second, for it was going…200 miles an hour. Its call is a piercing squeal.

The Peregrine Falcon lives in coniferous forests, where they use the open fields to catch prey. Some prey of the Peregrine Falcon are songbirds, small mammals such as cottontails, and small rodents. They will also eat waterfowl like mallards, grebes, and their relatives. [Mallards on alert]

Now if you see a raptor that looks like a Peregrine, don’t be too sure. Prairie Falcons are very similar to Peregrine Falcons. [Call of Prairie Falcon] One way to tell the difference in flight is the brown dots sprinkling the Prairie Falcon’s wings.

So if you see a Peregrine Falcon, tell yourself you saw the king’s hunting bird, the greatest raptor of royalty.” [Call of Prairie Falcon]

If you're a teacher using BirdNote in the classroom, please let us know!

Special thanks to Carol and John Stansfield. Scott B. recorded in school district studio  http://www.asd20.org/Schools/sitw/Pages/default.aspx

The Mission of School in the Woods, dedicated to the study of natural sciences in a natural setting, is to inspire our students to be critical thinkers as they pursue lifelong learning through direct interaction with living systems, integrated into an academically challenging curriculum in a safe environment. Our naturalists will share their deep appreciation and stewardship of the natural world with the larger community.