The Secret Stash of Eggshells

She gets calcium from her leg bones 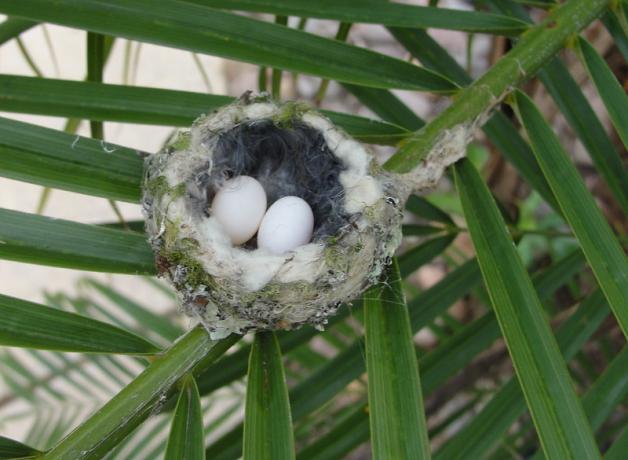 Developing eggshells requires a key ingredient — calcium — in larger quantities than the female typically has in her bloodstream. Just how different bird species supply or store calcium for egg-laying isn’t fully known. While some species seek out extra calcium from their environment, many species simply "borrow" calcium directly from their leg bones! The eggs seen here are those of an Anna's Hummingbird.

The Secret Stash of Eggshells

The tiniest hummingbird and the 250-pound ostrich have at least one thing in common. Like all birds, they lay eggs — precision engineered, and wrapped in an exquisite shell made of calcium.

That key ingredient — calcium — is needed on demand and in larger quantities than the female typically has in her bloodstream. So birds have a trick or two up their sleeves or in their legs.

Just as their bodies form the first cells of an egg, the birds start to assemble a special stash of mostly calcium in the hollow space in their leg bones. It’s called medullary [pronounced MED-uh-larry*] bone. As the egg develops, that stored calcium is rapidly dissolved and sent from inside the leg to the shell gland, then formed into the new shell, ready for laying in the nest.

Just how every bird species supplies or stores calcium for egg-laying isn’t fully known yet. Some birds appear to rely on other, more immediate sources of calcium, like consuming calcium-rich grit from the ground.

And some Arctic-nesting shorebirds have evolved an especially clever trick: just in time for egg-laying, they ingest the teeth and bones from lemming skeletons to stock up on calcium.

Today's show brought to you by the Bobolink Foundation.  I'm Michael Stein.