...the golden owl that hunts by day 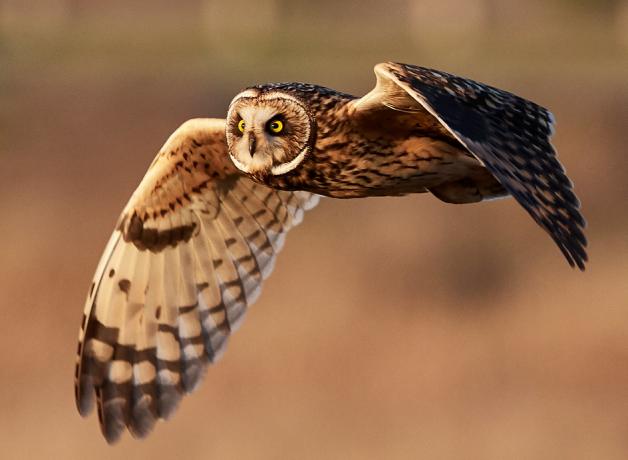 Flapping with deep, slow wing-motion, a Short-eared Owl appears almost to float above the ground. This owl has an extensive world range, including North and South America, Europe, and Asia. Still, it's declining, due to development, agriculture, and overgrazing. American Bird Conservancy and Partners in Flight consider this bird at-risk. But the federal Conservation and Wetland Reserve Programs are showing promise for Short-eared Owls, by preserving large blocks of habitat. Let your elected representatives know that you support these programs!

On a cold, crisp January morning, a beautiful golden-brown bird of prey sits atop a fence post. Suddenly, the bird takes flight on long, rounded wings. Flapping with deep, slow wing-beats, it appears almost to float above the ground, like an enormous moth. It’s a Short-eared Owl, an owl especially adapted to hunt during the day.

Short-eared Owls are found on grasslands and tundra and along coastlines. They have an extensive world range, including North and South America, as well as Europe and Asia. [Short-eared Owl barking] Yet despite the widespread range, this unconventional owl is declining. In North America, grassland habitats are dwindling due to development, agriculture, and overgrazing. American Bird Conservancy and Partners in Flight consider the Short-eared Owl at risk.

BirdNote celebrates the work of our conservation partners and the everyday actions of our listeners to reverse the alarming decline in North American birds. Together, we can bring them back. Learn more and get involved at birdnote.org. 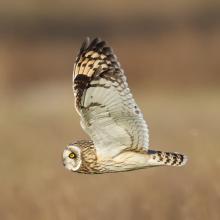 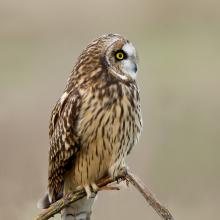 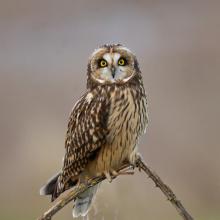 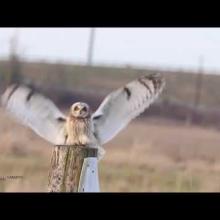