Song of the Kauai O'o 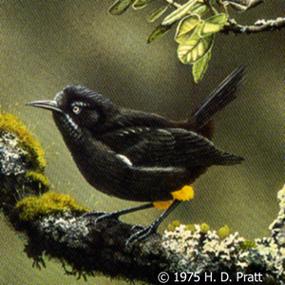 The sweet, bell-like tones of the Kauai O'o were heard for the last time nearly 20 years ago. The native birds of the Hawaiian Islands, like birds of many island groups, have been hard hit by changes wrought by humans. At least 90% of the bird species driven to extinction in recorded history have been island-dwellers. The Macaulay Library has several recordings of the O'o. (Search for Kauai Oo.) Learn about endangered Hawaiian birds from ABCbirds.org.

The Song of the Kauai O’o

This is BirdNote!
[Kauai O’o song and Hawaiian forest background sounds]
The poignant, bell-like tones you’re hearing belong to the Kauai O’o, a small forest bird of the Hawaiian Island of Kauai. This recording was made in the Alakai Wilderness of Kauai, a region of native rainforest that often lies shrouded in mist. Sadly, the Kauai O’o’s gentle song was heard for the last time nearly twenty years ago. [Kauai O’o song]
The native birds of the Hawaiian Islands, like birds of many island groups, have been hard hit by changes brought about by humans. Habitat destruction, introduction of non-native species, and slaughter of native species have taken a drastic toll on the animal and plant life of islands throughout the world.
At least ninety percent of the bird species driven to extinction in recorded history have been island-dwellers. The demise of the Kauai O’o and perhaps 15 other native Hawaiian forest birds was greatly hastened by mosquito-borne avian diseases, where neither the mosquito nor the disease was native.
At least we have the O’o’s song to remember it by. [Kauai O’o song]
This song was recorded in 1975. Birdsongs for BirdNote are provided by the Macaulay Library of Natural Sounds at the Cornell Laboratory of Ornithology. For a link, come to BirdNote.org, I’m Frank Corrado.
### 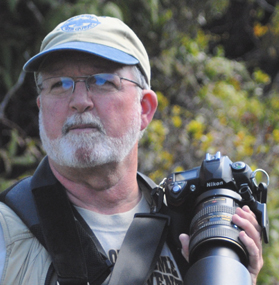 By Jason Saul
Tweets into beats: