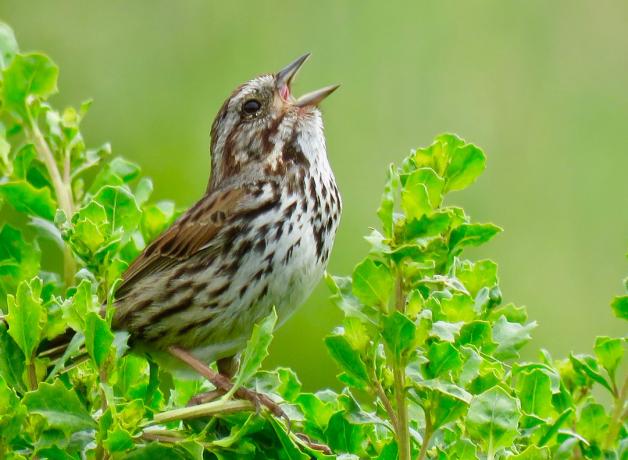 Young male Song Sparrows learn about 10 songs from adult tutors - sometimes from their fathers, but not always. And they learn in stages: 1) "subsong," when the birds babble in a quiet and unstructured way; 2) the "plastic" stage, which contains recognizable adult syllables but is still wobbly, uncertain; and 3) the "crystallized" song, with notes that are well formed and repeated with little variation.  Juvenile Song Sparrow sounds provided by Chris Templeton.

This is BirdNote.
[Adult Song Sparrow song]
Songbirds, like this Song Sparrow we’re hearing, learn to sing.
Young male Song Sparrows learn about 10 songs from adult tutors — sometimes from their fathers, more typically from other males in their neighborhood.
And they learn in stages. In the first stage, called “subsong,” the birds babble in a quiet and unstructured way, like this young male recorded in the month of August.
[Song Sparrow subsong]
Subsong is often puzzling to birders, because it hardly resembles adult song.
[Other adult song]
Later, during the next phase of learning, called the plastic stage, our young male’s singing contains recognizable adult syllables. But the notes are still wobbly and not arranged into distinct songs. Listen to the different fragments strung together in the singing of a four-month-old male.
[Song Sparrow plastic song]
Song development stops in spring. After almost a year of learning and practice, our young male’s notes are well formed and repeated with little variation in discrete,  two-to-three-second songs. Now listen to our same young male sing two adult songs.
[Two “crystallized” songs]
He is easily recognized as a Song Sparrow and will sing these songs for the rest of his life.
[Other adult song]
Hear it all again, at birdnote.org.
###
Song of the Adult Song Sparrow at the beginning of this show was provided by the Macaulay Library of Natural Sounds at the Cornell Lab of Ornithology, Ithaca, New York and recorded by G.A. Keller.
All other bird sounds of the Song Sparrow recorded by Chris Templeton.
BirdNote's theme music was composed and played by Nancy Rumbel and John Kessler.
Producer: John Kessler
Executive Producer: Chris Peterson
© 2014 Tune In to Nature.org     August 2016     Narrator: Michael Stein

Song Sparrow - More at All About BirdsLearn more about Chris Templeton's researchMore at RoyalSocietyPublishing.orgSong Sparrows can be very territorial - check out this study!