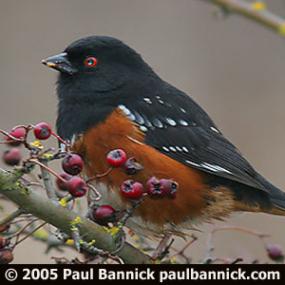 This is BirdNote!
[“Mew” of Spotted Towhee]
Don’t worry, BirdNote hasn’t “gone to the cats.” This feline-sounding call comes from a common resident bird, the Spotted Towhee.
[“Mew” of Spotted Towhee]
Sometimes called “not-a-robin”, the towhee can look like a robin at first glance, with a dark back and brick-red sides. Take a better look, and you’ll see a white belly and a black hood that covers the head and shoulders. White spots adorn the wings and tail. And those ruby-red eyes that sparkle from its black head!
If that isn’t enough to keep the Spotted Towhee separate from the robin, then watch the way it feeds. A robin searches a lawn looking for worms, but a towhee prefers to forage on dirt under protective vegetation. The towhee hops forward on two legs, inspecting dead leaves for insects. And then—and this is the amazing part—it does a sort of backward bunny-hop to rake the leaf litter behind it and expose tasty morsels.
So, the next time you see a red-eyed, backward-bunny-hopping bird that’s calling like a cat, remember: it’s not a robin. It’s a Spotted Towhee.
[“Mew” of Spotted Towhee]
Scratch up a few more facts about this bird and about BirdNote, and give us a few facts of your own, by taking a quick survey at our web site, BirdNote.org. Thank you.
###
Call of Spotted Towhee and feeding sounds provided by: The Macaulay Library of Natural Sounds at the Cornell Lab of Ornithology, Ithaca, New York.
Sound recordist: K. Colver
Producer: John Kessler
Executive Producer: Chris Peterson
© 2009 Tune In to Nature.org             Rev. for March 2009 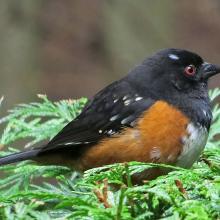 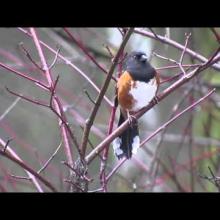 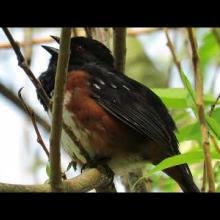 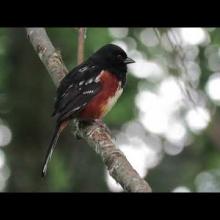