A Swirl of Snow Geese 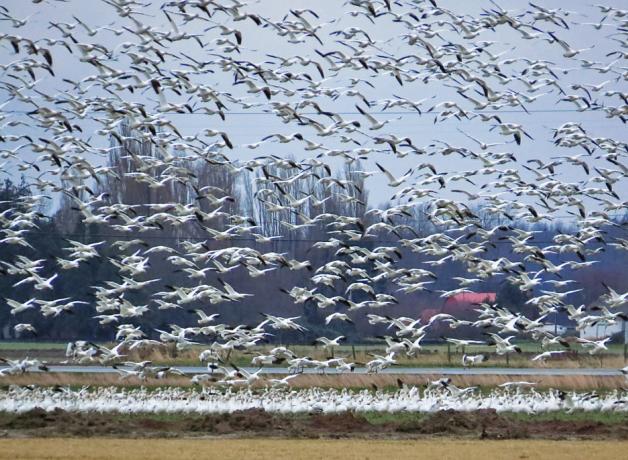 Snow Geese nest from far northeastern Russia to Greenland, in the arctic and subarctic. They winter in large flocks on the deltas of rivers in northwestern Washington, areas along the Eastern Seaboard, and throughout the Mississippi Flyway. Watching Snow Geese in flight, Barry Lopez described them, "as if the earth had opened and poured them forth, like a wind, a blizzard, which unfurled across the horizon above the dark soil ... great swirling currents of birds in a rattling of wings..." To see if Snow Geese winter near you, visit Cornell's All About Birds. Be sure to watch the amazing video by Barbara Galatti, below!

A Swirl of Snow Geese

This is BirdNote! [Calls of Snow Geese, throughout episode]

In summer, Snow Geese nest in the arctic and subarctic from far northeastern Russia to Greenland. But in winter, some may spend the season near you.

Here’s how author and naturalist, Barry Lopez, describes the flight of Snow Geese:

“I remember watching a large flock rise one morning from a plowed field about a mile distant. I had been watching clouds, the soft, buoyant, wind-blown edges of immaculate cumulus. The birds rose against much darker clouds to the east. There was something vaguely ominous in this apparition, as if the earth had opened and poured them forth, like a wind, a blizzard, which unfurled across the horizon above the dark soil, becoming wider and higher in the sky than my field of vision could encompass, great swirling currents of birds in a rattling of wings, one fluid re-curved sweep of 10,000 passing through the open spaces in another, counter-flying flock, while beyond them lattice after lattice passed like sliding walls, until in the whole sky, you lost your depth of field and felt as though you were looking up from the floor of the ocean through shoals of fish.”

To view an amazing video and find out where you, too, might see Snow Geese, visit our website, BirdNote.org. I’m Michael Stein.