Named for the Greek muse of epic poetry! 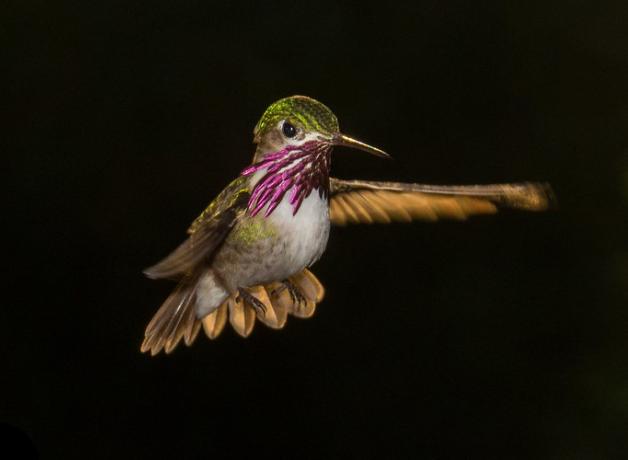 The tiniest bird in continental North America: the Calliope Hummingbird - a 3-1/4-inch jewel, weighing in at just a tenth of an ounce. These birds migrate north each spring from Western Mexico. From its perch, a male Calliope Hummingbird surveys its territory. This exquisite bird was named for the Greek muse of epic poetry, and it's the smallest long-distance avian migrant in the world.

This is BirdNote!
[Call of Calliope Hummingbird, in Ponderosa pine forest]
The tiniest bird on the North American continent. The Calliope Hummingbird is barely more than three inches long and weighs just a tenth of an ounce.
[Calliope Hummingbird]
This little gem spends its summer in the mountains of southwestern Canada and the northwestern United States. It winters in Western Mexico.
From its perch atop an elderberry bush, a male Calliope Hummingbird surveys its territory. First, we see just its metallic-green back and needle-like bill. But as it turns, its throat catches the sun and glistens with slender shafts of rosy purple. The male Calliope Hummingbird flies a short distance and hovers, to drink nectar from the blossoms of a golden currant.
The female has built a nest nearby on a hemlock branch, among a cluster of old cones. Sometimes the shape of the nest resembles the cones. You can see a photo of a female Calliope on her nest at our website.
While the exquisite hummingbird was named for Calliope, the Greek muse of epic poetry, the Calliope Hummingbird is an inspiration in its own right.
[Calliope Hummingbird, background of Ponderosa pine forest species]
Learn more about hummingbirds – and which one you might attract to your garden – at BirdNote.org. I’m Mary McCann.
###
Sound of the Calliope Hummingbird provided by The Macaulay Library of Natural Sounds at the Cornell Lab of Ornithology, Ithaca, New York recorded by G.F. Budney.  Ponderosa Pine ambient from Pygmy Nuthatch 119403 by G.A. Keller.
Producer: John Kessler
Executive Producer: Chris Peterson
© 2011 Tune In to Nature.org   June 2011/2020 May 2022   Narrator: Mary McCann 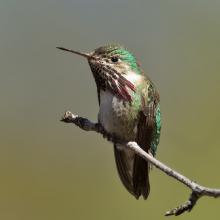 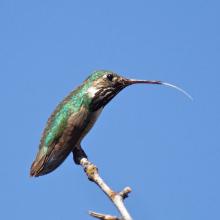 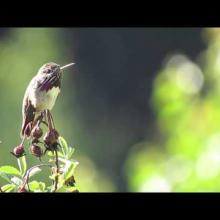