On the Trail of the Bobwhite 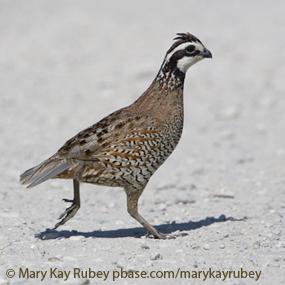 The Northern Bobwhite -- many call it just the Bobwhite -- has an unmistakable call, which is also the source of its name. The species is native to the US, east of the Rockies. But Northern Bobwhites have been released into the wild as game birds in many locales in the West.

Is there a bird or topic you would like to hear about on BirdNote? Please contact us!

On the Trail of the Bobwhite

This is BirdNote!
[Northern Bobwhite whistled calls]
More than a few birds take their names from the distinctive calls they make. And maybe the most vivid example is the call of the Bobwhite, [Northern Bobwhite whistled call]. It’s the only quail native to eastern North America. Officially known as the Northern Bobwhite, this chunky quail lives in brushy open country, grasslands, farmlands, and the edges of woods.
Bobwhites are smartly feathered in rust and brown, with bold face markings. Except during breeding season, Bobwhites form coveys of up to twenty birds. They are one of the most economically important game birds in the U.S. [Northern Bobwhite whistled calls]
But Bobwhites are in trouble in most of their native range. Breaking habitat into smaller, separate pieces poses a major problem for the quail, as does the extensive use in farming of herbicides to control weeds. In addition, the birds are not adapted to the high density and close spacing of pine plantations. As a result, Bobwhite numbers have plummeted.
Like a number of other species of grasslands and open country, Bobwhites will require more focused management of their habitat to meet the stiff conservation challenges they now face.
Is there a bird or topic you would like to hear about on BirdNote? Give us a whistle [Northern Bobwhite whistled calls], or better yet, contact us at info@BirdNote.org. I’m Mary McCann.
###
Call of the provided by The Macaulay Library of Natural Sounds at the Cornell Lab of Ornithology, Ithaca, New York. Recorded by
Producer: John Kessler
Executive Producer: Chris Peterson
© 2014 Tune In to Nature.org     November 2016     Narrator: Mary McCann