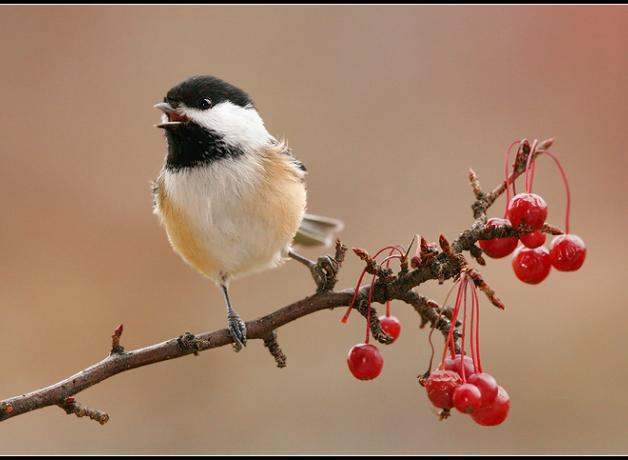 Few backyard birds are as beloved as the Black-capped Chickadee. The boldly patterned chickadee is perky, trusting – and it seems to introduce itself by calling its name – chick-a-dee. But when a chickadee voices its namesake call – using a host of variations – it’s most likely maintaining contact with its mate, scolding a predator, or announcing a food source. These chickadee calls, distinct from songs, are uttered by both sexes and may be voiced year-round.

This page is sponsored by Helen Hepp in honor of Carol Clothier.
Thanks for supporting the new BirdNote.org, coming in 2020!

The springtime [hey, sweetie] means something like, “Ladies, I’m a male chickadee looking for a mate. You other guys – get lost!"  Technically speaking, [hey, sweetie] is a song – a seasonal vocalization specifically tied to mating and territory.

When a chickadee voices its namesake [chick-a-dee], however, it is a sound categorized as a call. Calls, distinct from songs, are uttered by both sexes and may be voiced year round.

Chickadees call to one another as the pair moves about [chick-a-dee], as a way of remaining in contact. Black-capped Chickadees also voice a host of variations that may scold a predator, give an “all clear,” announce a food source, and more. So those perky, acrobatic chickadees . . . yes, okay, they’re cute. But they’re also clever. [chick-a-dee] 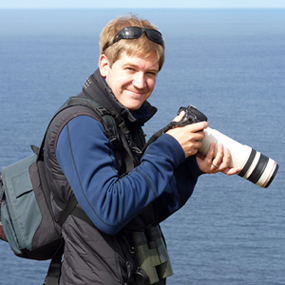