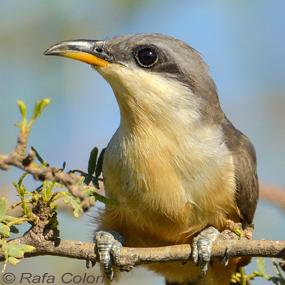 It’s winter in North America — a good time to head for the subtropical realms of South Florida and listen to the region’s birds, such as the secretive Mangrove Cuckoo pictured here. Rarely seen, it sings sporadically in winter. When it does, you’re sure to take notice. A sweeter voice belongs to the Spot-breasted Oriole. Found in suburban neighborhoods, these birds were brought to Florida in the 1940s from Central America. And we can’t forget the sharp-edged phrases of the White-eyed Vireo or the eerie cries of the Limpkin.

In North America, it’s winter: not a bad time to head for the subtropical realms of South Florida and listen in on some of the region’s birds. [http://macaulaylibrary.org/audio/176127].

Those are the sharp-edged phrases of a White-eyed Vireo. [http://macaulaylibrary.org/audio/176127].

This small, skulky songbird is a full-time resident in Florida and might sing any time of year. There lurks a more secretive bird in the Everglades and Florida Keys: the Mangrove Cuckoo. Rarely seen, it sings sporadically in winter but, when it does, you’ll know it: [http://macaulaylibrary.org/audio/129709, 0.14-.21]

Our final stop takes us to a wooded swamp, home to one of the continent’s most peculiar birds—and with a voice to match. [http://macaulaylibrary.org/audio/73922, 0.30-.36] 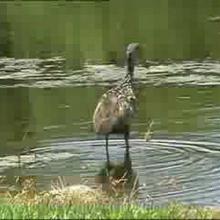 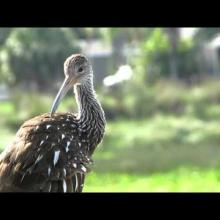