How many songs can you hear? 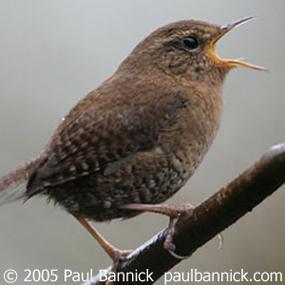 Bubbling, cascading, penetrating - the song of the Pacific Wren bursts from deep within huckleberry bushes and floats beneath tall, cool evergreens. Pound for pound, the Winter Wren of the East and its close cousin, the Pacific Wren of the West, have ten times the sound power of a crowing rooster. These tiny wrens can create sounds as they exhale and inhale, allowing the birds to sustain their long, melodious songs. The songs may last up to eight seconds! Listen to more songs of these birds at the Macaulay Library.

This is BirdNote!
[Song of the Pacific Wren*]
Bubbling, cascading, penetrating, the song of the Winter Wren bursts from deep within huckleberry bushes and floats beneath tall, cool evergreen trees. Listen again to one of the longest and most complex songs of the avian world.
[Winter Wren song]
If this robust, long-winded song conjures up images of a large, Pavarotti-like singer, you’ll probably be surprised to learn the Winter Wren is one of our smallest birds. At merely four inches, the plump body of this wren is about the size of Pavarotti’s thumb. Pound for pound, the Winter Wren has 10 times the sound power of a crowing rooster.
The stubby-tailed, dark brown Winter Wren can sustain its song up to eight seconds. You begin to wonder when the tiny thing will stop and take a breath! Opera singers, like the rest of us, can only sing notes on the out-breath and must pause briefly to take in a breath. The tiny Winter Wren can create sounds as it exhales and inhales, allowing the bird to sustain its long, melodious song.
[Winter Wren song]
The bird calls you hear on BirdNote come from the Macaulay Library at the Cornell Lab of Ornithology. To hear them again, begin with a visit to our website, BirdNote.org. I’m Michael Stein.
###
Song of the Pacific Wren* provided by the Macaulay Library of Natural Sounds at the Cornell Lab of Ornithology, Ithaca, New York. Recorded by G.A. Keller.
Producer: John Kessler
Executive Producer: Chris Peterson
© 2011 Tune In to Nature.org   April 2011   Narrator: Michael Stein

* According to BirdWeb.org: In 2010, the American Ornithologists' Union split the North American populations of Winter Wren into two separate species, the "Eastern Wren" of eastern North America and the "Pacific Wren" of the West.