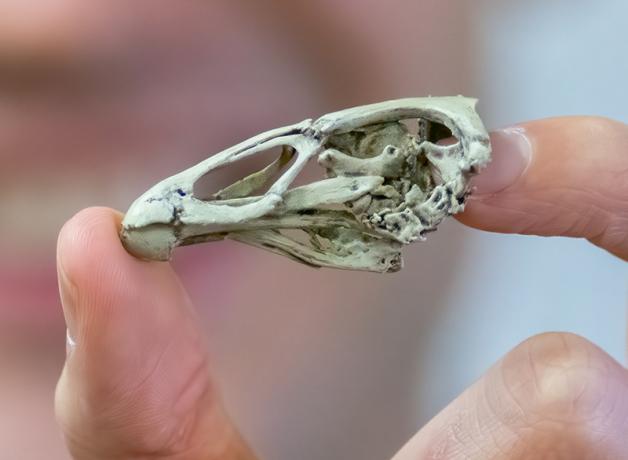 In 2018, paleontologist Daniel Field took a closer look at specimens from an amateur fossil collector. His team used micro-CT scanning, kind of like a high-energy CAT scan, to visualize the encased fossils. They were amazed to find a tiny bird skull: the earliest known fossil record of a modern bird. The skull looks chicken-like in the front and duck-like in the back. The bird may have looked and behaved like a modern shorebird.

In 2018, when paleontologist Daniel Field was researching the evolution of birds, he examined some previously overlooked fossil specimens from the end of the Age of Dinosaurs.

Daniel Field: The fossils were discovered by an amateur fossil collector from the Netherlands named Maarten van Dinther in the year 2000. Basically we had a very unimpressive looking rock with a couple of bones poking out, but they looked like they were probably bird bones, so we wanted to try to peer inside the rock to see if there was anything on the inside.

He set aside his chisel for this delicate work. Daniel and his team used micro-CT scanning, kind of like a high-energy CAT scan, letting them visualize the encased fossils in detail without the risk of damaging them.

Daniel Field: All of the giant giant dinosaurs went extinct about 66.02 million years ago when an enormous asteroid struck the earth and caused one of the largest mass extinction events in the history of our planet. And this fossil is somewhere around 66.7 million years old, which means that this animal was alive in what you can think of as a geological blink of an eye before the asteroid impact. It provides us with a spectacular lens into what birds were like just before the asteroid impact that wiped out the giant dinosaurs.

This is the earliest known fossil record of a modern bird — distinct from bird-like dinosaurs — with features like a toothless beak and fused foot-bones. The skull is small, a little under 2 inches long, so it wasn’t a large bird. And comparing the fossil to modern birds reveals something really interesting:

Daniel Field: The front of the skull looks very much like the skull of a small chicken-like bird like a quail. Whereas the back of the skull looks very similar to what you'd see in a small duck-like bird, something like a Green-winged Teal, for example. And the skull combines in a way we've never seen before and that's fascinating because in the present day, the closest living relatives of the chicken group happens to be the duck group. We think that the fossil is close to the last common ancestor of this really important living group of birds.

And so with this incredible turducken of a fossil, Daniel and his team named it: the Wonderchicken. (They gave it the more formal name of Asteriornis maastrichtensis [pron. ahs-teer-ee-OR-nuhs mah-strik-TEN-sus], but, c’mon — Wonderchicken!!!) And the Wonderchicken helps answer why those early modern birds survived the cataclysmic asteroid event.

And from the fossils, we know the Wonderchicken had long, narrow legs. It was found in what was, 67 million years ago, a Bahamas-like tropical white sand beach. That means it might not have needed forests to survive.

Daniel Field: So it's very plausible to reconstruct the wonder chicken as having been a relatively small bodied, long limbed shore-dwelling bird, something like a sandpiper in the present day. Which may corroborate this sort of idea that ground dwelling birds may have been at an advantage relative to their tree dwelling relatives who went extinct when the asteroid struck.

This nondescript, quail-sized bird that walked along the Cretaceous shoreline has given us a much richer understanding of the origins of birds as we know them. And for that, it truly earns the title: Wonderchicken.