How woodpeckers benefit many other birds 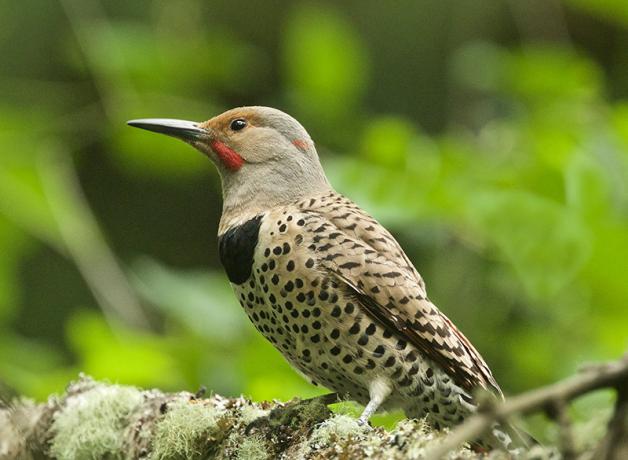 Woodpeckers - including this Northern Flicker - are master carpenters of the bird world. They're called "keystone" species for their crucial role in creating habitat suited to other woodland wildlife. Abandoned woodpecker nest-holes become nests or roosts for small owls, cavity-nesting ducks, swifts, bluebirds, swallows, wrens, and other birds, as well as many small mammals.

[Sound of Pileated Woodpecker excavating nest-hole]
With steady, resounding whacks of its chisel-like bill, a woodpecker excavates a nesting cavity in a tree. A pair of woodpeckers will use the hole for one nesting season, carving out a new one the following spring. But unlike most birds whose nests are good for just one season, the woodpecker’s cavity will have a long and useful career.
Woodpeckers, master carpenters of the bird world, are called “keystone" species for their crucial role in creating habitat suited to other woodland wildlife. Abandoned woodpecker nest-holes become nests or roosts for small owls, like this Northern Saw-Whet Owl [Northern Saw-whet Owl hoots] or cavity-nesting Wood Ducks.
[Wood Duck squeals].
Swifts, bluebirds, swallows, wrens, and other birds, as well as many mammals, make use of these holes. The snags can become multi-level condominiums for a whole host of wildlife. A venerable, dead tree, broken off at the top and perforated with multiple cavities, may actually be one of the most valuable trees in the forest.
[Call of Northern Flicker]
It’s satisfying to know that some simple choices can improve habitat for birds. For example, if you have to cut down a tree, consider leaving part of it as a snag. You’ll be helping the woodpeckers, and all the species that depend on them for homes. [Sound of woodpecker excavating nest hole]
For BirdNote, I’m Mary McCann.
### 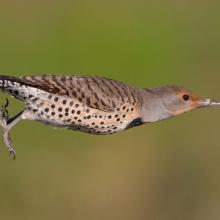 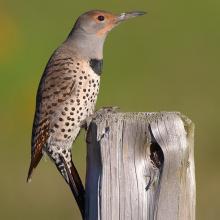 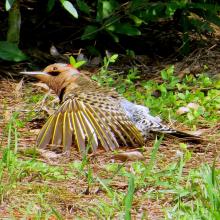 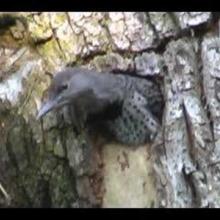 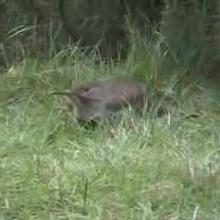 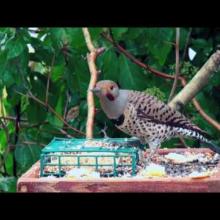