The World's Most Abundant Bird

There are an estimated 1.5 billion Red-billed Quelea living in Africa 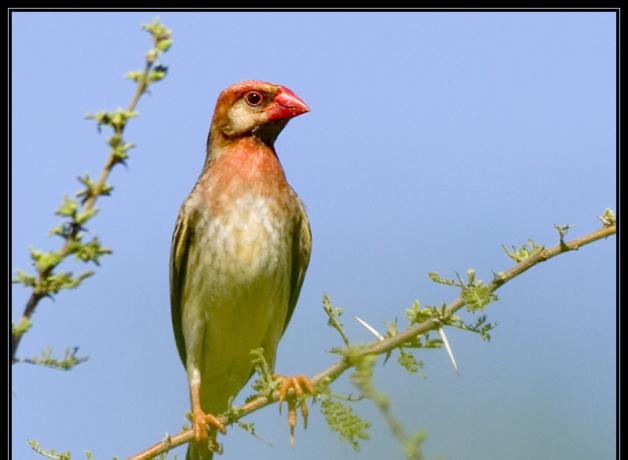 An estimated 1.5 billion Red-billed Quelea live in Africa today, making them the most abundant of all wild birds. The sparrow-sized Red-billed Quelea flock together in groups so large, from a distance they appear to be clouds of smoke. Red-billed Quelea are in the weaver family and create tens of thousands of carefully woven nests in their enormous colonies.

Never miss an episode of BirdNote by subscribing to our podcast. Just search for “BirdNote” in your podcast app.

The World’s Most Abundant Bird

In Africa, south of the Sahara, there’s a bird that roams the countryside in flocks—hordes, really—of two million or more. They fly in such tightly synchronized masses they can be mistaken at a distance for clouds of smoke.

The birds are Red-billed Quelea. It’s estimated there are 1.5 billion of them — making them the most abundant of all wild birds.

The sparrow-sized Red-billed Quelea, which is in the weaver family, has a stout, seed-cracking bill. The birds are mostly brown, but breeding males have red and black feathered heads.

Quelea nest in enormous colonies. A single tree may be hung with hundreds, even thousands, of carefully woven nests. Single colonies can cover hundreds of acres, totaling tens of millions of birds.

In fact, the increased planting of cereal crops over the last fifty years may have dramatically increased the number of quelea.

But setting aside their taste for crops, the sight of a couple million Red-billed Quelea swirling in unison and creating ever-changing patterns in the air is one of nature’s most amazing spectacles.

Never miss an episode of BirdNote by subscribing to our podcast. Just search for “BirdNote” in your podcast app.
### 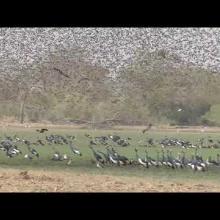 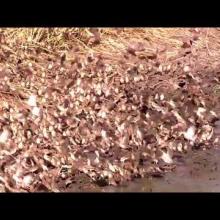