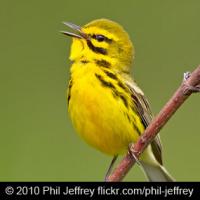 March 2, 2014
Despite their name, Prairie Warblers nest in tree farms of recently planted pines, in fields overgrown with scattered shrubs, and in clearings under power lines. Biologists call these “early successional” habitats. They’re characterized by plants that are the first to return to land 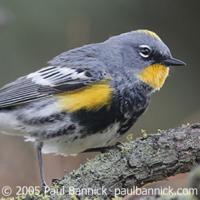 August 7, 2014
Imagine watering your garden on a hot August day, when a small yellow-and-gray warbler flutters into the spray and begins taking a shower. The Yellow-rumped Warbler, probably mid-way through its fall migration, is unafraid. Yellow-rumped Warblers use many types of habitat. They breed high 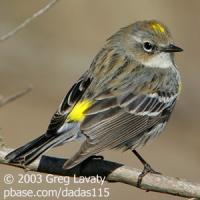 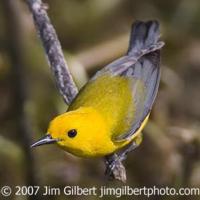 May 18, 2018
May is the prime month across much of North America to celebrate the return of migratory birds from the tropics. Of all those coming back, it is the warblers that many birders eagerly await. And of the more than 50 species that brighten our spring, many gleam like precious stones. From the 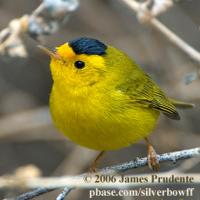 September 7, 2010
The Wilson's Warbler is soon to head south, not to return until spring, one of many songbird migrants returning to the Central American tropics for the colder months. He will fly after dark to avoid the threat posed by hawks and falcons. He'll take up precisely the same winter quarters as 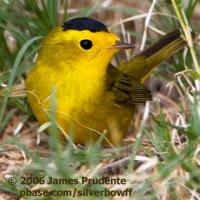 December 17, 2019
Early this fall, the tiny Wilson's Warbler began its long migration to Belize, where it winters. Navigating by the stars, the 1/4-ounce bird made a series of night flights spanning more than 2500 miles. This warbler returns to the same coffee plantation each year. Taller trees that shade 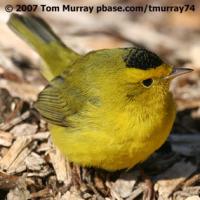 April 3, 2010
Back in September, BirdNote began following a tiny Wilson's Warbler as it migrated south to the tropics. We visited the warbler again in December, on its wintering grounds on a shade-grown coffee farm in Belize. As April arrives, the sprightly bird is migrating northward, with males 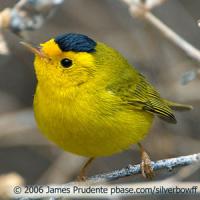 May 19, 2009
A week of non-stop singing attracts a female Wilson's Warbler to the male's territory at the edge of the forest. The female alone builds a nest, concealing it in mossy ground at the base of a shrub, or perhaps in a tussock of grass. She lays four eggs, which she incubates for 12 days. When 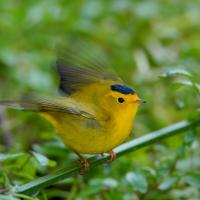 August 31, 2020
By early August, the rich yellow of the feathers of the Wilson's Warbler seems to flash in every forest thicket. Despite predators and weather, many pairs of adults have raised four young, which now flit about on their own. The young males hatched this spring learned their father's songs 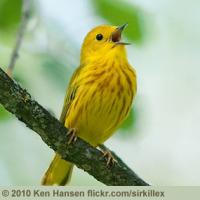 Tune Up Your Ears - East

March 31, 2017
By March in the East, cardinals and other songbirds that don't migrate are already singing heartily to attract mates. Many other birds - including this Yellow Warbler - will return north from the tropics in April and May, announcing themselves in song as soon as they arrive in nesting