What’s it like to be a citizen scientist studying Pigeon Guillemots? It’s fun!

It’s early on a calm, July morning. I’m with Govinda Rosling, co-coordinator of the Pigeon Guillemot Research Group on Washington’s Whidbey Island. We’re surveying Pigeon Guillemots in the colony at the feeder bluffs at Mutiny Sands beach. What prey are the adults bringing to their young waiting in the burrows? How often are they feeding them? And so forth… 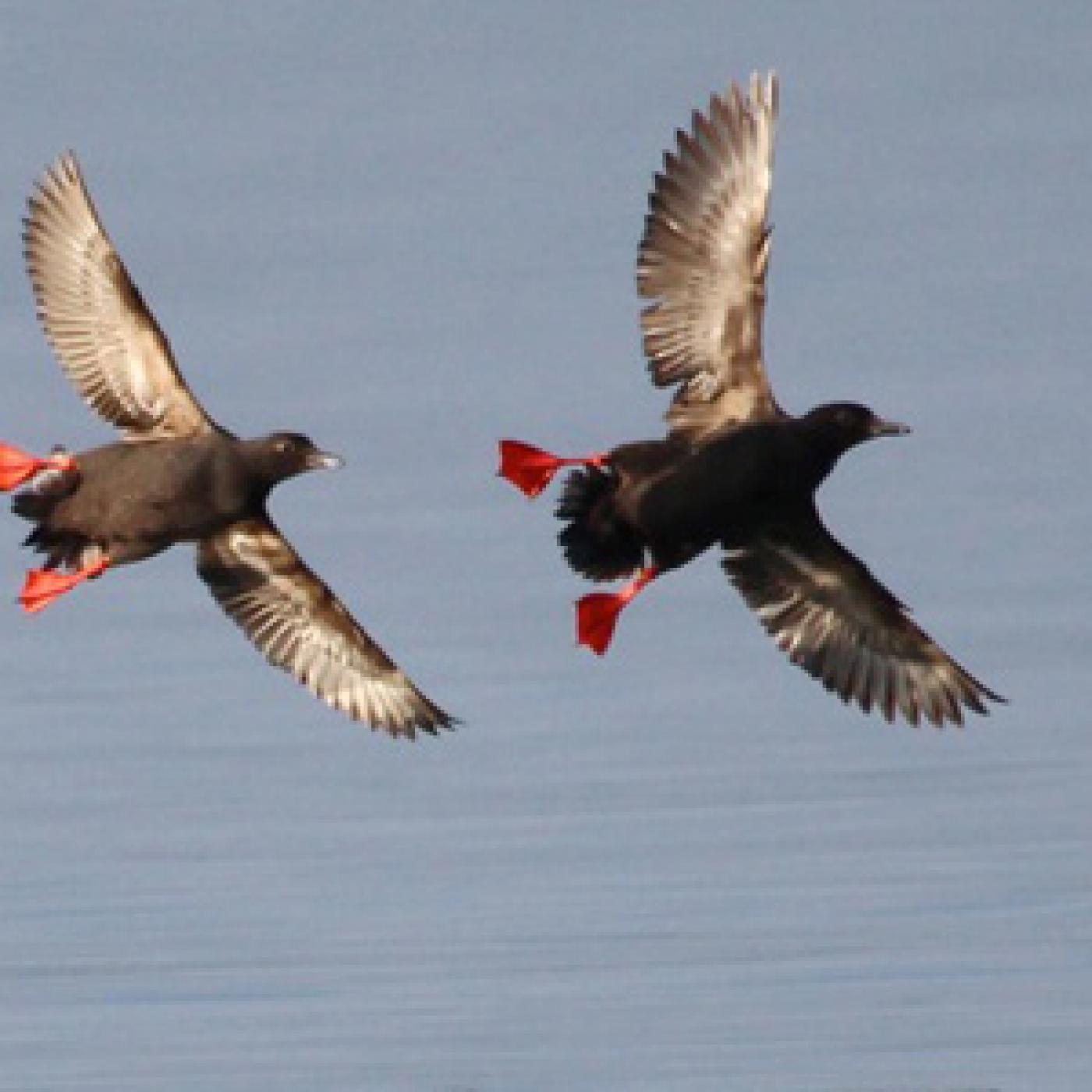 Pigeon Guillemots spend most of the year out on the water, but come to land in May and June when it’s time to breed and raise their two chicks. They enlarge burrows made by kingfishers. 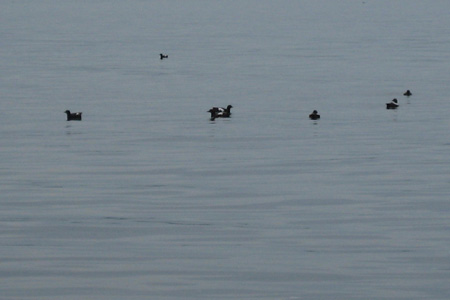 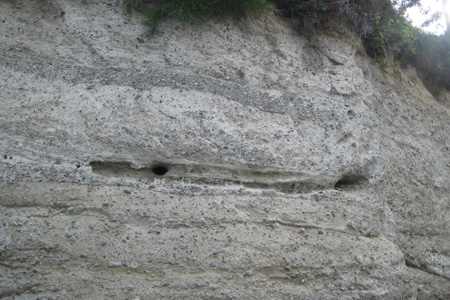 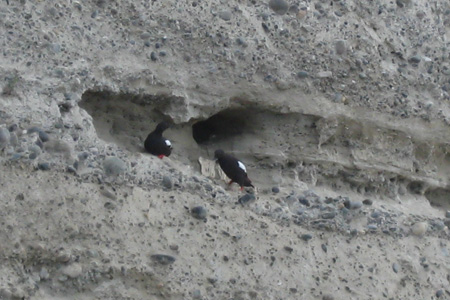 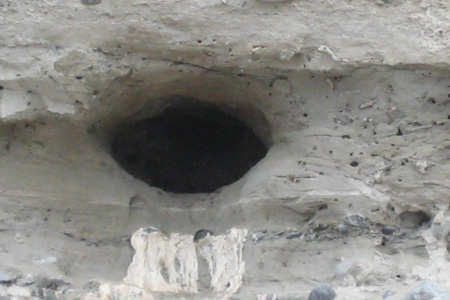 Govinda plants herself on the beach, binoculars in hand. As she describes it, you want to “become” a piece of driftwood.

She’s documenting the feeding activity of the adult Pigeon Guillemots –- how often they bring food to their chicks in the burrows, and what kind prey they bring (mostly spiny sculpin and long, skinny gunnel). She, along with many other volunteers, will survey Whidbey’s 24 designated sites once a week, an hour at a time, for about three months.

The adult guillemots will wait out in the water until they feel safe bringing in the prey. They deliver fish to their chicks through August.

Sometimes they have an “escort” who helps confuse and deflect predators such as Bald Eagles. The Mutiny Sands colony suffered pretty high predation by Bald Eagles in 2012, so they are cautious. Today, the Bald Eagles are somewhere else, so the guillemots are at ease.

Those on the beach, though, hustle back to the water with the approach of beachgoers and their companions. 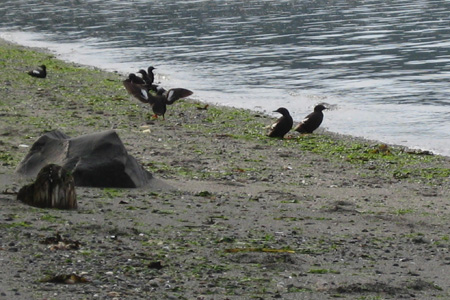 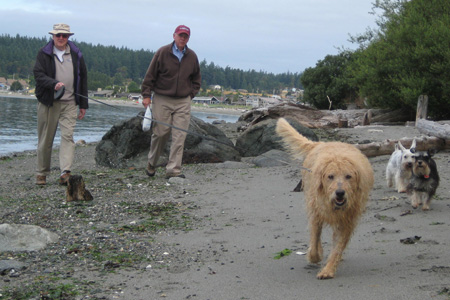 Govinda has been with the Pigeon Guillemot Survey for several of its eight years. She knows the importance of keeping good notes about the location of the burrows and the activity of their inhabitants. Each burrow is numbered and mapped. 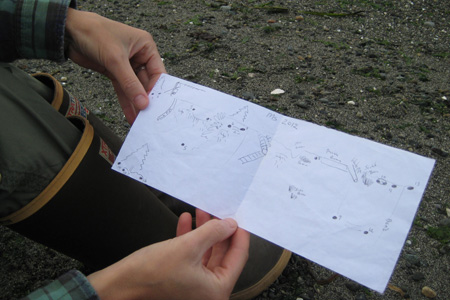 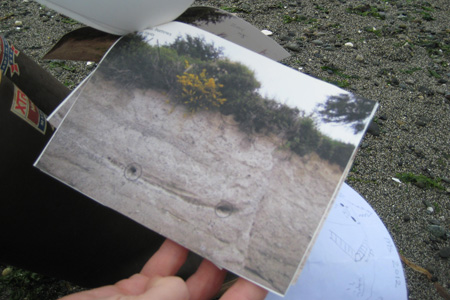 That this broken eggshell fell out of the burrow signifies success! 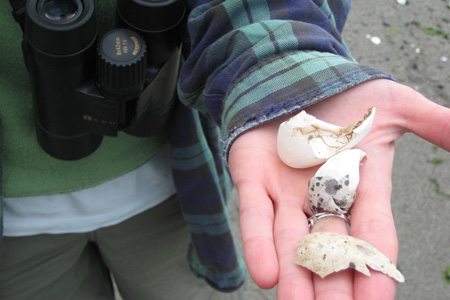 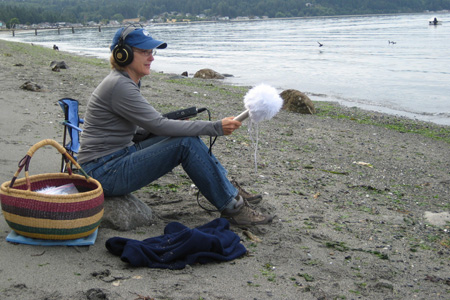 We’ll conduct our BirdNote interview on the beach, but part of my job, also, is to capture the ambient sounds – the sounds of Pigeon Guillemots as they carry out their activities, the lapping of the water’s edge, Heerman’s, Glaucous-winged, and California Gulls in the distance. It’s harder than you might guess, because the sounds of barges and boat traffic travel easily across the water. But I feel lucky to sit there and take it all in…

Birds get in our psyche and lift our spirits, don’t they? They “mark” many of us, some literally, like Govinda. She grew up on Whidbey, then was away for a time. When she came back, she started a new chapter in her life. To celebrate the move home, she had a Pigeon Guillemot, landing on a rock, tattooed to her arm. 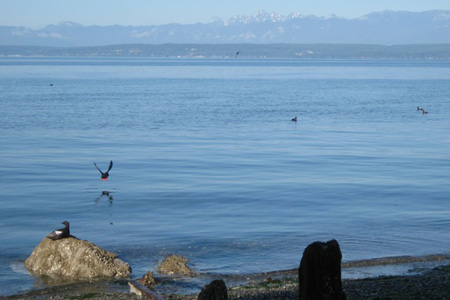 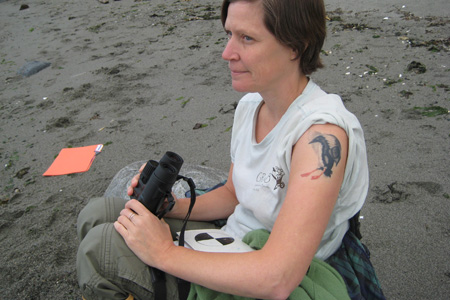 Every volunteer has been trained by Govinda or her co-coordinators, left to right – Phyllis Kind, Frances Wood, Govinda, and Kelly Z.

To track the guillemots’ population trends and breeding success, the volunteers follow set protocols. These citizen scientists are eager for the training or to check in with one another at a refresher course.

Data carefully gathered by the volunteers of the Pigeon Guillemot Study of Whidbey Audubon, finds its way to Island County’s Marine Resources Committee. 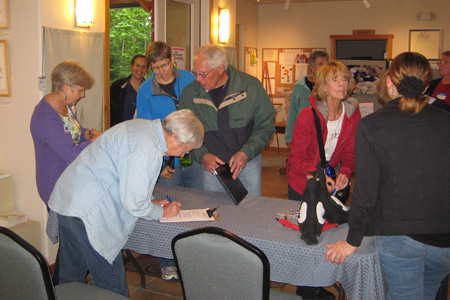 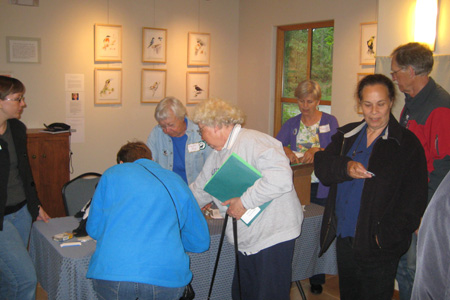 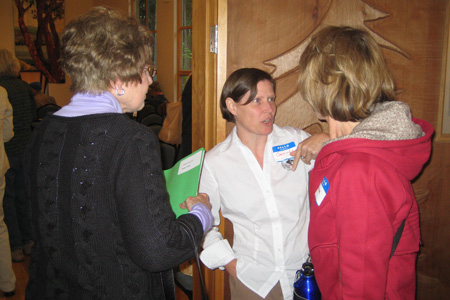 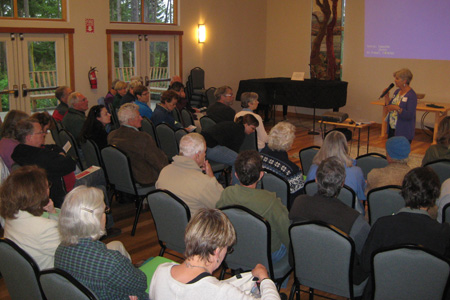 Let’s return to the beach … and to why volunteers like Govinda study the birds. As their brochure says, “Pigeon Guillemots are high on the food chain, like we are. …Healthy marine habitat benefits the birds, fish, whales, and us.” Or as Govinda says, “You fall in love with them.”