All Aboard to See Whooping Cranes!

Chris Peterson is the founder and executive producer of BirdNote. 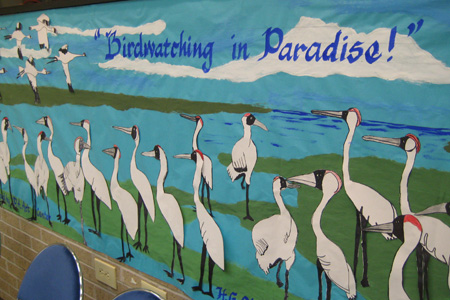 The festival is well organized, well attended, and full of opportunities to learn about and glimpse one of North America’s rarest birds – the Whooping Crane. Festival-goers can also learn about and experience other birdlife and nature of coastal Texas. 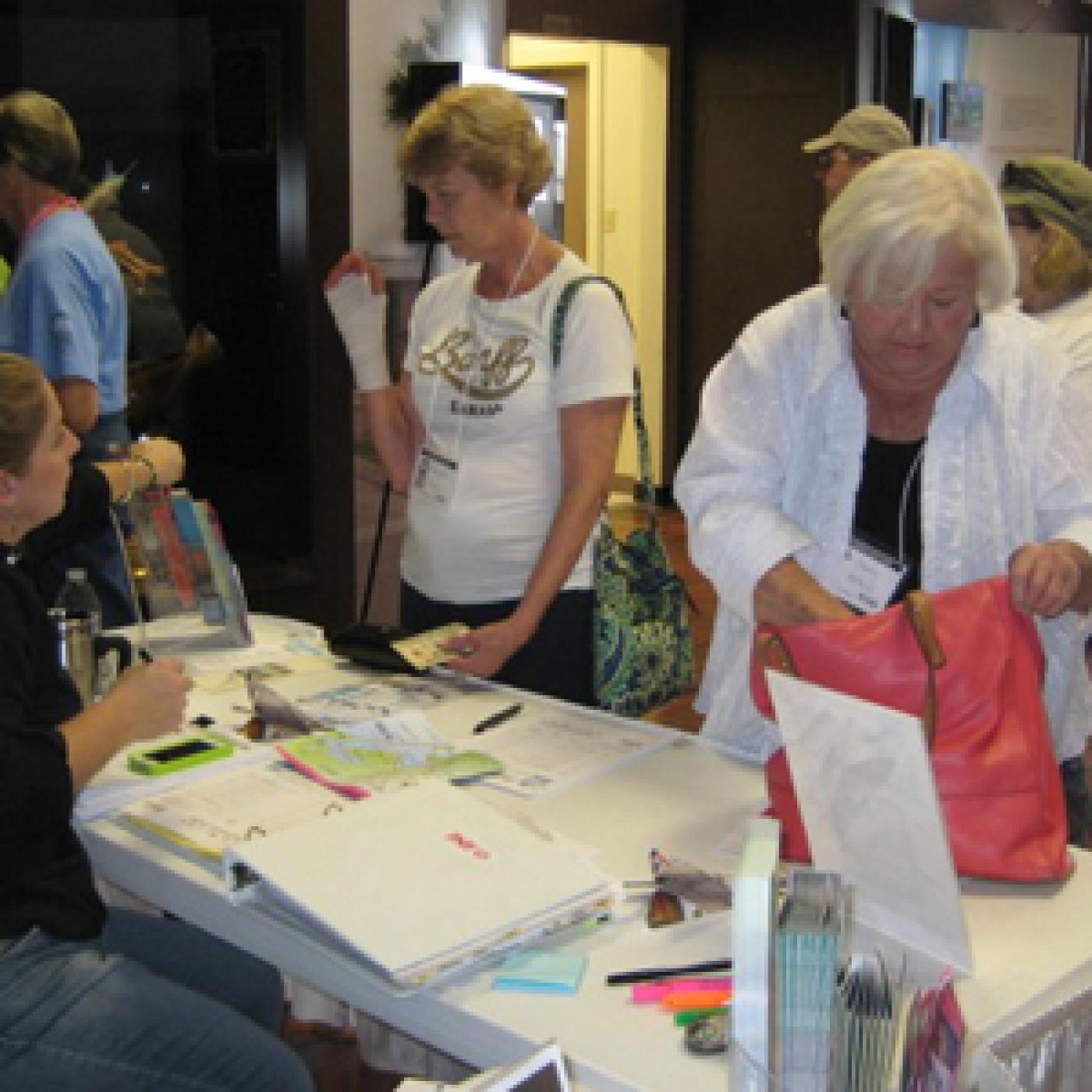 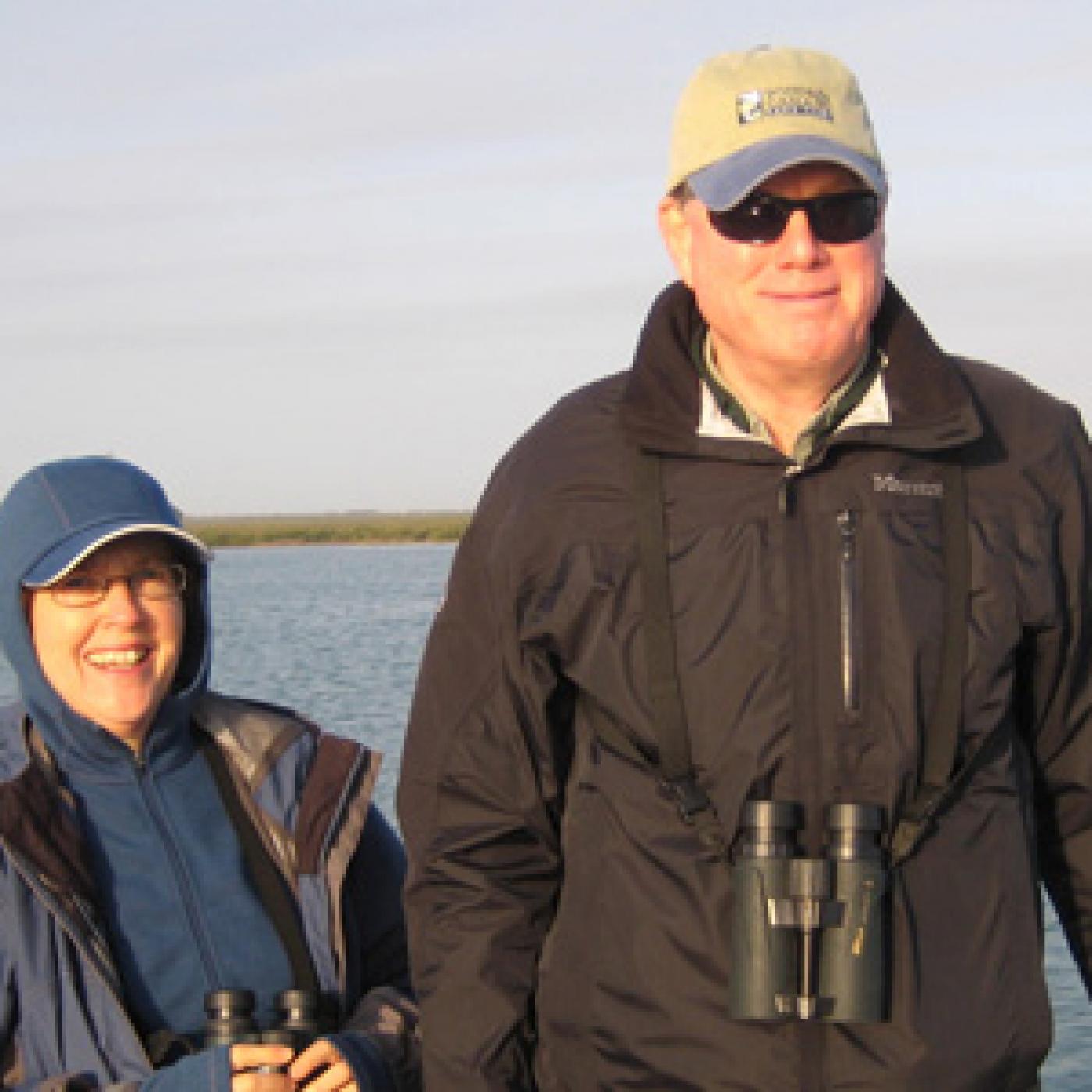 All aboard! I hope you can take a few minutes to join BirdNote’s editor, Todd Peterson, and me, for some highlights of the boat trip to view the Whooping Cranes. 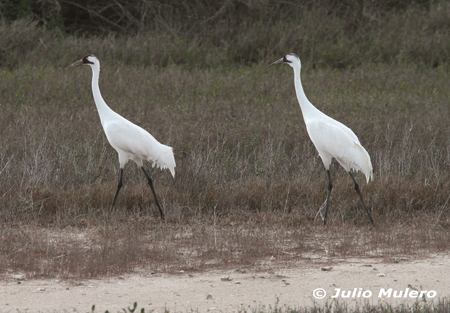 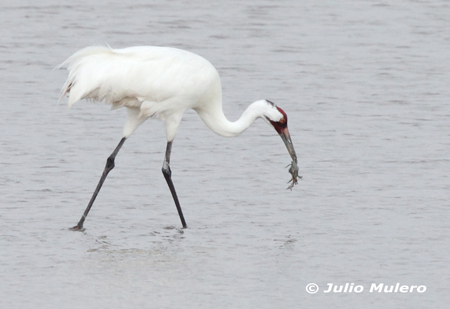 “The survival of the last natural population of endangered Whooping Cranes depends on healthy coastal wetlands in Texas. …
On their wintering grounds in and around the Aransas National Wildlife Refuge, Whooping Cranes require large expanses
of wetlands where they feed almost exclusively on blue crabs.”

- Securing a Future For Whooping Cranes

brochure by the International Crane Foundation

These aerial photos give you an idea of the location and expanse of the wetlands. The one on the right shows the Gulf of Mexico on the right, the wetlands on the left. It’s into those wetlands where we’ll be heading on the boat. The deep waterway that intersects right to left is Aransas Pass, through which large ships travel in and out of Corpus Christi. 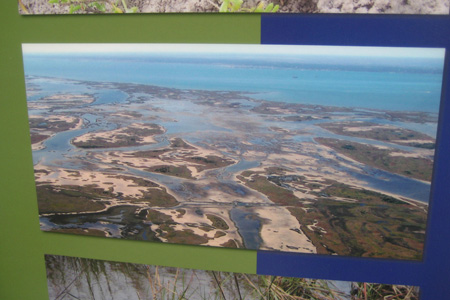 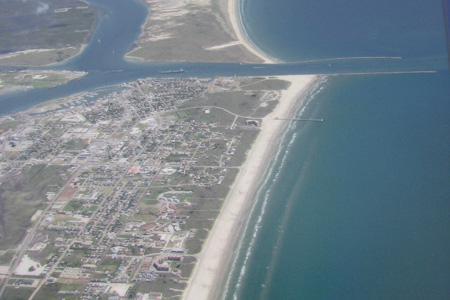 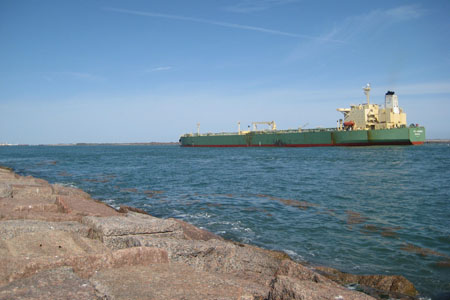 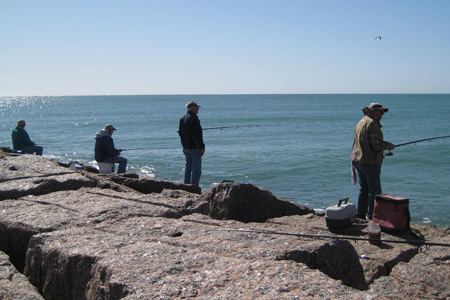 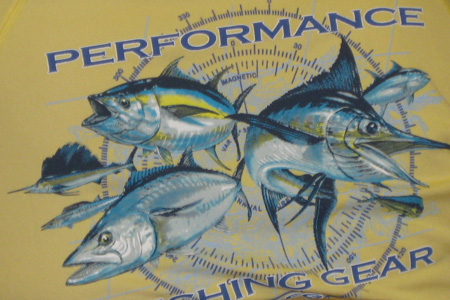 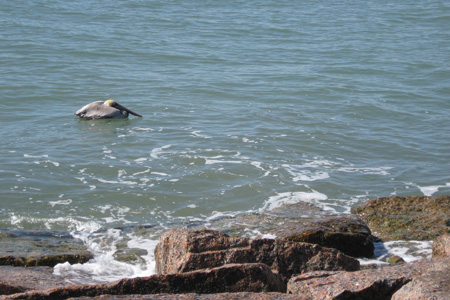 Welcome Aboard the Wharf Cat!

It’s just after dawn, the Wharf Cat has docked, and we’re about to head north into crane habitat – on the Blackjack Peninsula and Matagordo Island - to look for pairs and families of Whooping Cranes. 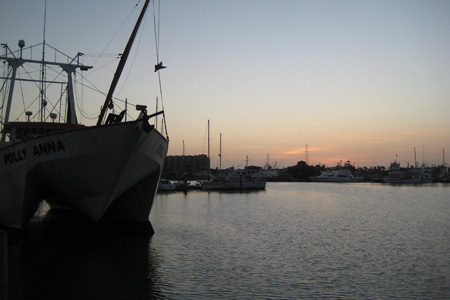 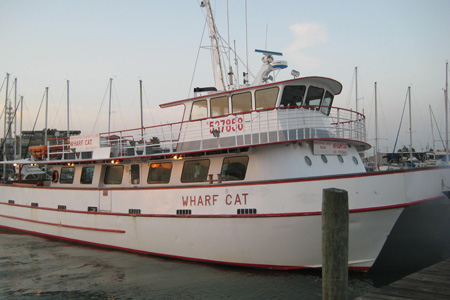 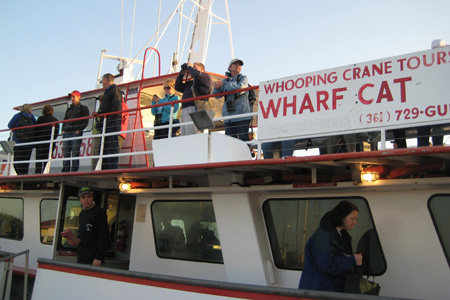 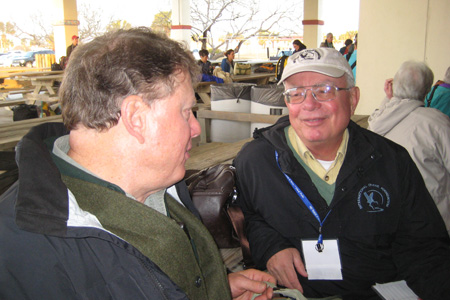 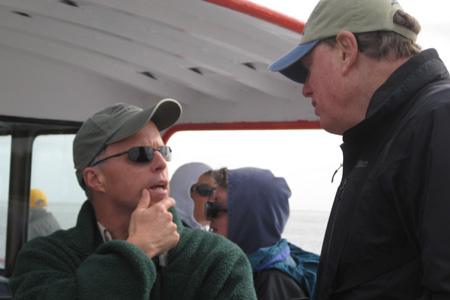 And Todd talks with Sammy King of the Louisiana Cooperative
Fish and Wildlife Research Unit, from the Louisiana Whooping Crane Reintroduction project.

With his wife, here’s Julio Mulero, who graciously provided the photos of the Whooping Cranes for this blog. Obviously, it’s unseasonably cold today. 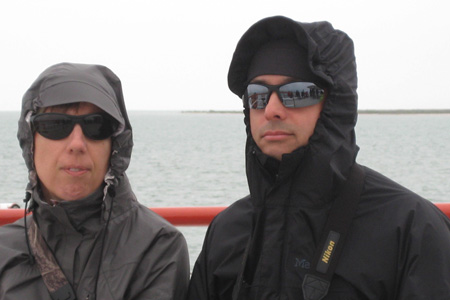 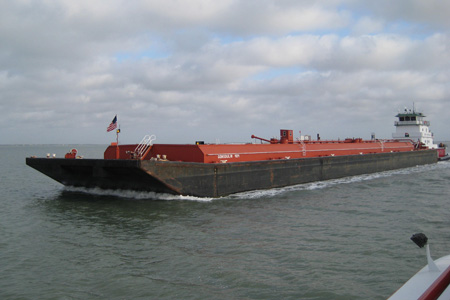 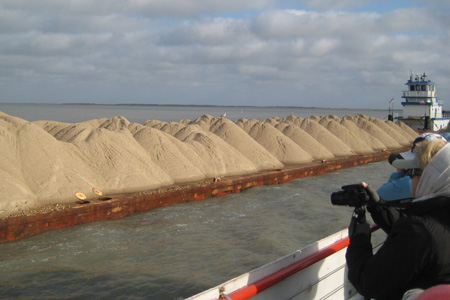 Along the way, we see quite a bit of barge traffic. We motor for about 45 minutes before we get into the crane habitat – grasslands interspersed with blackjack oak, freshwater ponds, and marshes. Everyone's alert and eager for our first sighting of the Whooping Cranes! 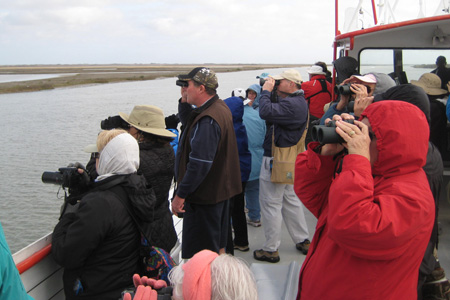 Our guide, Ray, says about the juveniles in the family groups: “Their coloring is like that of a perfectly toasted marshmallow.”

A Few Facts About Cranes

The Whooping Crane is the tallest North American bird and can reach a height of five feet with a wingspan of seven or eight feet. They are omnivores, so they eat both plant and animal material. These cranes are an endangered species.

Whooping Cranes are slow to mature, and they do not have very high reproductive rates. They are not sexually mature until three to five years of age.

A pair lays only one or two eggs and usually successfully raises but one chick. They put a lot of care into that one chick.

There are about 600 Whooping Cranes total – up from an all-time low of 15. About 450 are in different wild populations. The majority – 275 – are in the population that winters in Port Aransas National Wildlife Refuge and summers in Wood Buffalo National Park in northern Canada. There are about 160 birds in captivity.

"When little fresh water is delivered to the coast, due to drought or overuse of waters upstream, salinity levels rise and blue crabs become scarce. Without enough blue crabs to eat and fresh water to drink, the cranes weaken and can die or fail to produce chicks [back on their nesting grounds]."

- Securing a Future for Whooping Cranes

brochure by the International Crane Foundation.

Note the riprap along the side of the waterway, put there by the Army Corps of Engineers to keep the habitat from washing away, due to wake action by marine traffic 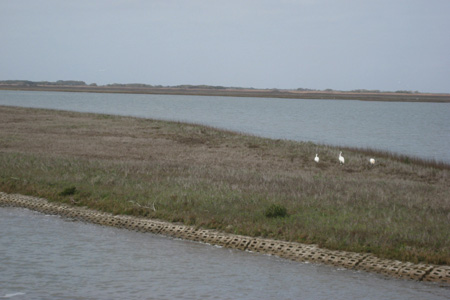 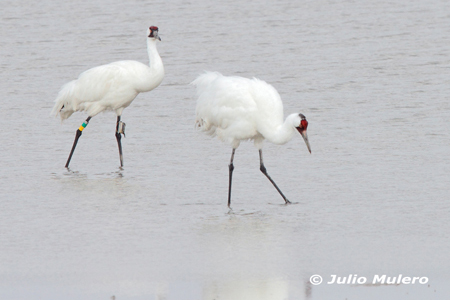 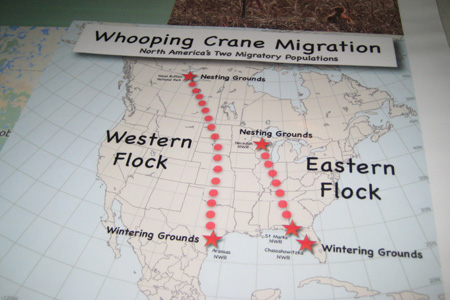 During March and April, the Whooping Cranes will make the trip northward to their breeding grounds in Wood Buffalo National Park – a spectacular and isolated boreal forest landscape that straddles Alberta and the Northwest Territories.

Note the satellite tracking device on the left leg of the bird on the left.

Today, here in the Texas Coastal Bend, we’ve seen 35 Whooping Cranes – close to 10% of the total wild population. Everyone, including us, is feeling lucky and grateful. We wish them a safe trip north.

In the meantime, I hope you can take a few minutes to listen to the BirdNote shows we’ve created. One features the outing on the Wharf Cat to see the cranes, and the other takes listeners to Wood Buffalo National Park, summer home of the Whooping Cranes. You’ll find the links below. Enjoy!

Texas Master Naturalist program - Developing a corps of well-informed volunteers to provide education, outreach, and service dedicated to the beneficial management of natural resources and natural areas within their communities