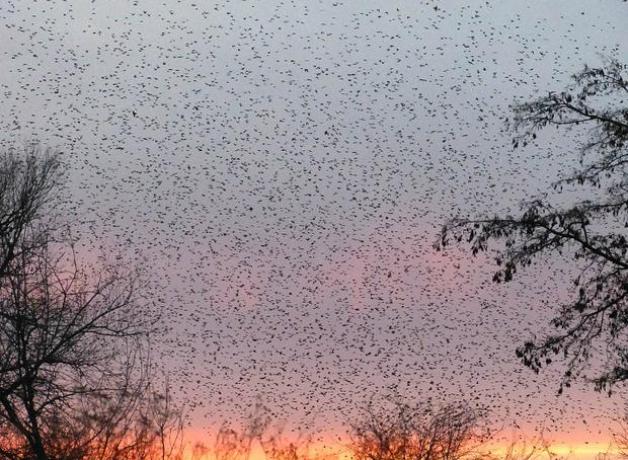 In winter, flocks of American Robins spend the night together. Typically, a few dozen to a few hundred birds roost communally in trees or an old barn, or under a bridge. But larger robin roosts can number in the thousands, or even tens of thousands! In 2007, observers near St. Petersburg, Florida, estimated that 720,000 robins were roosting on an island of mangrove trees. If the average robin weighs 2.7 ounces, that was nearly 61 tons of robins!

We think we know robins pretty well. Red-breasted birds of spring that tug earthworms from the ground. [They nest in the back yard, and gather, we think, in small flocks to feed in trees with berries.]

Perhaps less well known is that, in winter, flocks of American Robins spend the night together. Usually a few dozen to a few hundred birds roost communally in trees or an old barn, or under a bridge. Larger robin roosts can number in the thousands, or even tens of thousands of birds! [Whoosh of flock flying]

A remarkable number — until we consider the scene near St. Petersburg, Florida during the winter of 2007. Observers here counted robins arriving in late afternoon to roost on an island of dense mangrove trees. For two and a half hours, the stunned census-takers watched a steady stream of robins flying overhead.  [Wing flaps] Based on the rate of birds passing by per second, a conservative estimate was 720,000 robins. If the average robin weighs 2.7 ounces, that was nearly 61 tons of robins!

The previous year, the same roost hosted a mere 42,000 robins. In 2007, it was likely snow and ice to the north and west that pushed these legions of robins to Florida.

And we thought we knew robins! [American Robin song]

You can share this show with a friend when you come to birdnote.org.

Birdsounds provided by The Macaulay Library of Natural Sounds at the Cornell Lab of Ornithology, Ithaca, New York.  Song of American Robin [94261] recorded by W.L. Hershberger. Call notes of an American Robin [133356] recorded by G.A. Keller.
The wing flaps of individual birds, plus the flocks in flight featured in today’s show were recorded by Gordon Hempton of QuietPlanet.com.
BirdNote’s theme music was composed and played by Nancy Rumbel and John Kessler.
Producer: John Kessler
Executive Producer: Chris Peterson
© 2016 Tune In to Nature.org   January 2014/2018/2021  Narrator:  Michael Stein 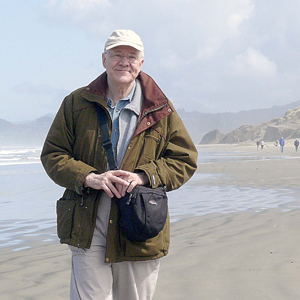