Knowing a bird’s name isn’t everything. 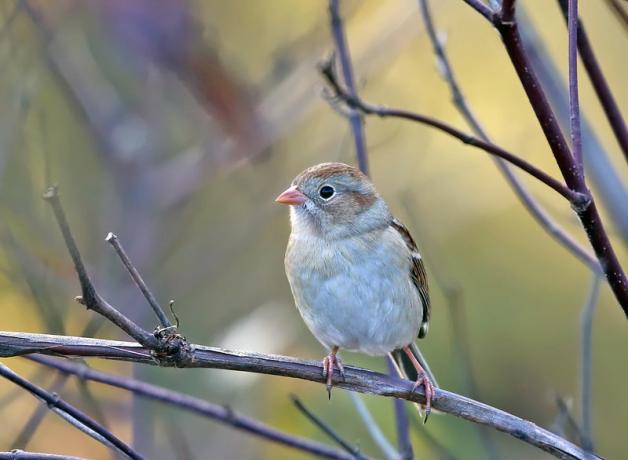 Poet Ada Limón often writes about birds, and her new book, The Hurting Kind, is no exception. Birds are a throughline in the book — between the seasons, from childhood to present, and knowing and unknowing. Two of her poems examine opposite sides of the “knowing/unknowing” coin. You can read many more fantastic poems, with and without birds, in Ada Limón's new book, The Hurting Kind.

Poet Ada Limón often writes about birds, and her new book, The Hurting Kind, is no exception. Birds are a throughline in the book — between the seasons, from childhood to present, and knowing and unknowing. That last part, knowing and unknowing, is what we're going to look at in today's episode, with two poems that examine opposite sides of that coin.

Calling things What They Are

I pass the feeder and yell, Grackle party! And then an hour later I yell, Mourning dove afterparty! (I call the feeder the party and the seed on the ground the afterparty.) I am getting so good at watching that I’ve even dug out the binoculars an old poet gave me back when I was young and heading to the Cape with so much future ahead of me it was like my own ocean. Tufted titmouse!, I yell and Lucas laughs and says, Thought so. But he is humoring me, he didn’t think so at all. My father does this same thing. Shouts out at the feeder announcing the party attendees. He throws out a whole peanut or two to the Stellar’s Jay who visits on a low oak branch in the morning. To think there was a time I thought birds were kind of boring. Brown bird. Gray bird. Black bird. Blah blah blah bird. Then, I started to learn their names by the ocean and the person I was dating said, That’s the problem with you, Limón, you’re all fauna and no flora. And I began to learn the names of trees. I like to call things as they are. Before, the only thing I was interested in was love, how it grips you, how it terrifies you, how it annihilates and resuscitates you. I didn’t know then that it wasn’t even love that I was interested in, but my own suffering. I thought suffering kept things interesting. How funny that I called it love and the whole time it was pain.

Mark Bramhill: The poem tracks Ada's growing interest in identifying both the world around her — the flora and fauna, the birds at the party and afterparty — but also within.

Ada Limón: The more I have paid attention to the natural world, the more I've been interested in naming, the more specific naming I want to do with my own reality, with my own emotions, right? like, am I angry or am I sad? Or am I just hungry? Like, what is it? And I feel like we spend so much time just saying we're fine. And the act of naming the birds sort of evolves into the act of naming what's important, what is valued, what is interesting, and also what is love. It unravels in that direction. And I was surprised by it. When I finished the poem, I was very surprised of where it ended up. But I thought, right, that is what it's about. It's about finding the right language for not just the birds, but for the human experience.

Mark Bramhill: But in this second poem, Limón examines the limitations of appreciating birds and the world through naming and identification. As summer turns to fall and leaves begin to fall from the trees, many birders have had a moment of questioning: am I looking at a leaf, or a bird?

Ada Limón: I wrote this poem, kind of laughing at myself at how here you think,   I'm very observant and I will absolutely know when I see a bird and then half the time you're like, oh no, that's a leaf. Oh, that's a leaf. Um, and so of course, you know— and I know experienced birders have the same experience, where they're staring at something, staring at something and you're like, oh no, that's a piece of trash. And you know, this whole time you've been sort of stalking it, excitedly thinking you're seeing some rare visiting bird in the shrub. Um, when in fact it's like, the leftover neighbor's plastic that has blown into the, into the branches.

It's The Season I Often Mistake

Birds for leaves, and leaves for birds.
The tawny yellow mulberry leaves
are always goldfinches tumbling
across the lawn like extreme elation.
The last of the maroon crabapple
ovates are song sparrows that tremble
all at once. And today, just when I
could not stand myself any longer,
a group of field sparrows, that were
actually field sparrows, flew up into
the bare branches of the hackberry
and I almost collapsed: leaves
reattaching themselves to the tree
like a strong spell for reversal. What
else did I expect? What good
is accuracy amidst the perpetual
scattering that unspools the world.

Ada Limón: I think really as much as we love to name things, and in some ways it gives us an ownership and a connection and we value it because we know it. We have to remember that knowing things is not the way that we love them. Naming is definitely a way of loving, but it's not all of it.  I feel like really what draws us to birds is wonder and awe. So I think there has to be that balance, right, of wanting the information and wanting the knowledge and wanting the naming, the exact language. But then also surrendering to the wonder, the awe, the unknowing, the mystery, and how good that is for the human soul to give up that kind of power and to give up that need for naming.

Mark Bramhill: You can read many more fantastic poems, with and without birds, in Ada Limón's new book, The Hurting Kind. Learn more on our website, BirdNote.org. I'm Mark Bramhill.