The call depends on the time of year... and the gender! 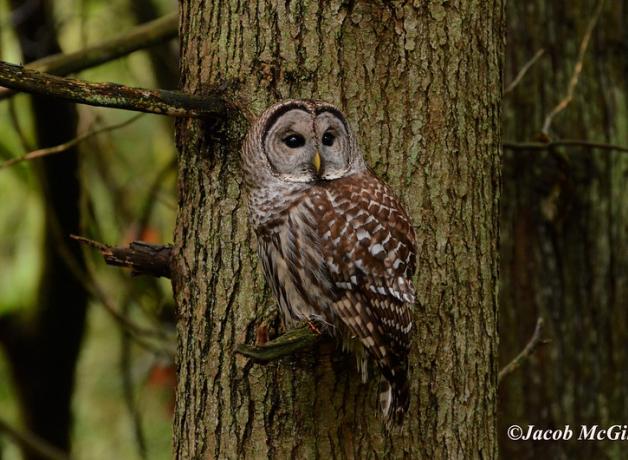 Barred Owls are very territorial, and they don't migrate. Solitary calls from a male in early spring probably mean that he has not attracted a mate. In May and June, he continues to hoot, though less frequently. By summer, breeding season has passed. Maybe this solitary Barred Owl is what some scientists call a "non-breeding floater". Perhaps his patch of woods is just too small to host a pair of owls year round.

[Two-phased hoot of a Barred Owl]

I’ve been hearing an owl, a Barred Owl, much of this year and last. In January, even though it was cold and dark, its call drew me outside. [Two-phased hoot of a Barred Owl]
I think it was the one I heard last year, because these large, gray-brown owls are very territorial, and they do not migrate. Both males and females make the signature nine-note hoot — “Who cooks for you? Who cooks for you-all?” [Two-phased hoot]

But throughout the winter, I heard only solitary calls. It was probably a male. If he had attracted a mate, I would have been hearing a duet like this, a caterwauling courtship that can sound downright peculiar. [Maniacal sound of Barred Owls in courtship]

One day in April I found him, being dive-bombed by crows while he tried to sleep in a deciduous tree. [A few crows mobbing] In May and June, he continued to hoot, ‘though less frequently. [Two-phased hoot]

Now in late summer, the breeding season has passed. What have I witnessed? Could this Barred Owl be what some scientists call a “non-breeding floater?” Is his patch of woods just too small to host a pair of owls year round?

When it comes to Barred Owls, there’s a lot more to the story. Plus, you can see a photo of one on our website, birdnote.org. I’m Mary McCann.