Learning how to prevent collisions 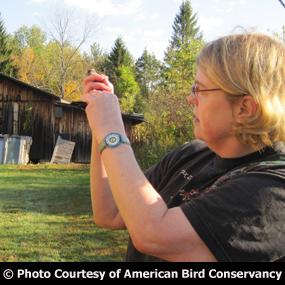 Why, when birds have such exceptional vision, do hundreds of millions die every year by slamming into glass windows? Christine Sheppard, who manages the Bird Collisions Campaign for American Bird Conservancy, explains: "Birds don't see glass. ... People don't see glass either, but people understand context. They understand window frames. They understand right angles." Christine and her colleagues are conducting research to discover patterns that, when applied to glass, can prevent collisions. Learn more, including how to prevent collisions.

[Simulated sound of bird smacking into window]
Why, when birds have such exceptional vision, do hundreds of millions die every year by slamming into glass windows?  [Repeat simulated sound]
We called Christine Sheppard, who manages the Bird Collisions Campaign for American Bird Conservancy, to find out:

Christine and her colleagues are conducting research at Powdermill Nature Reserve, about an hour from Pittsburgh, to discover patterns that, when applied to glass, can prevent collisions. They’ve constructed a 30-foot tunnel:

T105 7:06+ … the birds are put in at one end…it’s dark inside and at the other end of the tunnel is two pieces of glass side by side and… There’s a mist net that keeps the birds from being injured... When they try to fly towards the plain glass …that’s scored as avoiding the patterned glass…

So what patterns deter best?

T 105 9:00 This all boils down to spacing … and consistently we find that the little birds we’re testing, the warblers and other passerines, that are the most common victims of bird collisions, will not fly through a horizontal slot that is two inches or smaller and they won’t fly through a vertical slot that’s four inches or smaller....– so when they see a large space on a window, they don’t consider that there’s any barrier but if they see lines that are providing the spacing, they’ll fly around it instead of trying to fly through it.

American Bird Conservancy has more informationLearn more, including how to prevent collisions.New York Times has more!BirdWatching Daily has a lot of practical ideas for homes! By David Sibley