Expert care for birds injured in collisions with buildings! 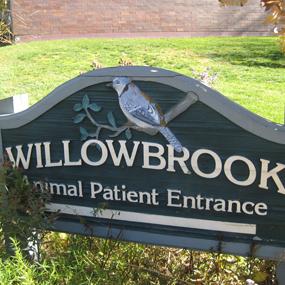 At Willowbrook Wildlife Center in suburban Chicago, there’s hope for birds that have collided with skyscrapers during migration. Today, volunteers from Chicago Bird Collision Monitors have rescued and transported 28 injured or stunned birds to the wildlife center for rehabilitation. Many birds aren’t so fortunate. But for those that are, BirdNote celebrates wild bird rehabilitators everywhere.

Listen! Here’s a hopeful sound!
[Bird scrabbling in bag, eager to get out!]
A bird, a Hermit Thrush, has revived. It was rescued and placed in a paper bag after it struck a window while migrating.
This morning, we're with Justin Sharp at Willowbrook Wildlife Center, west of Chicago. He's just received 28 injured or stunned birds, rescued by volunteers of Chicago Bird Collision Monitors. We’re in a rehab unit, with fans running for fresh air. Justin begins by taking two small bags, each containing a Hermit Thrush, into a screened enclosure.
“What I’m going to do now is test-fly these birds, identify ‘em, try to get their age and sex… We let ‘em go in here and see how well they fly. Do a quick visual examine on them – whether they have any obvious injuries – eye injuries are common – that type of thing. If they do have some injury or they do not fly well enough, they will get checked into ‘clinic.’ If they do fly well, and nothing’s visibly wrong with them, we will band ‘em and release ‘em, right out here.”

After the test, Justin says:

“This Hermit Thrush [young-of-year], he didn’t have very good flight, so this one’s staying. He’ll get checked in. They’ll do a full exam in the clinic. Usually we put them on an anti-inflammatory for head trauma – and we have little tiny bird doses. The other guy, the adult, he’s good to go, so he will be banded and released.”     [Song of a Hermit Thrush]

Many birds aren’t so fortunate.  But for those that are, BirdNote celebrates wild bird rehabilitators everywhere. See how it’s done at Willowbrook when you come to birdnote.org.
[Song of a Hermit Thrush]
###