Baby, it's cold outside! Keep that birdbath thawed! 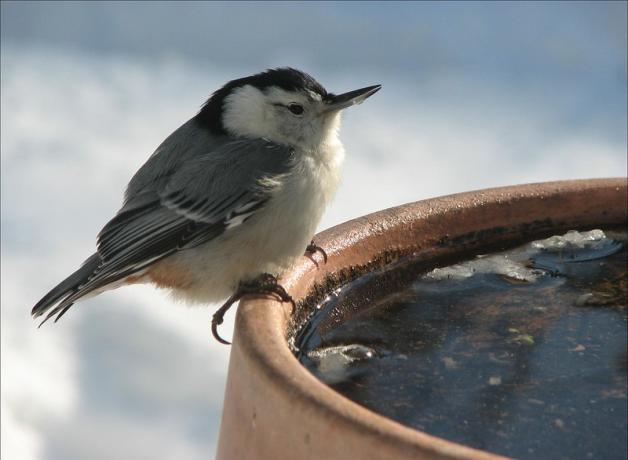 Does the image of a frozen birdbath bring to mind a small yellow bird with ice skates? Birds need water in all seasons, for drinking and for bathing. When the water is frozen, you can thaw it with hot water. Or go the slightly more expensive route and add a heater.

It's 27 degrees outside, and a robin is rolling and flopping in the birdbath, flinging water every which-way. What on earth is it thinking? Isn't it going to freeze to death with all that water on its feathers? Well, it turns out that bathing in winter actually helps birds' feathers protect them from the cold. The bath washes away particles of dirt that might otherwise prevent the feathers from their water-proofing work. And it probably also helps remove parasites.

Birds need water in all seasons, for drinking and for bathing.

When the water is frozen, you can thaw it with hot water. Or go the slightly more expensive but easier route by adding a heater.

Some things to keep in mind: In winter, it’ll help to put the birdbath on the south side of the house, or in the spot that gets the most sun, or against a sheltered wall. Place it no more than six feet from a tree or shrub, so the birds can fly to cover if a predator comes along.

If you supply winter birds with water, [Single Red-breasted Nuthatch, plus chatter of nuthatches and chickadees] you’ll be doing them a great service – and you might attract some really fascinating customers.