Is there a way to stop crafty squirrels from robbing the bird feeder? 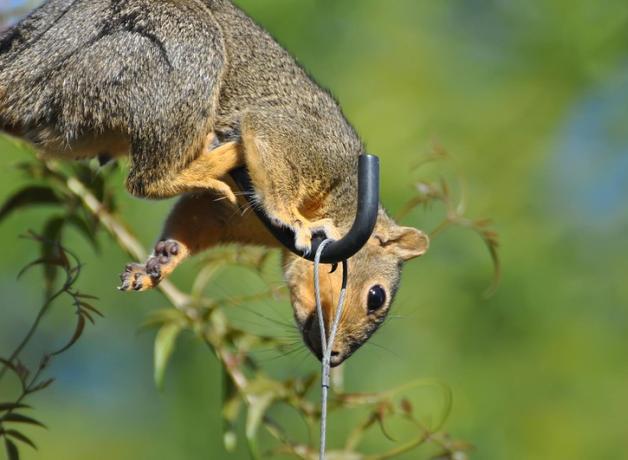 In this episode of BirdNoir, the Private Eye hears from his friend Danny, who is having his bird feeders pilfered by a pack of rowdy squirrels. While a determined squirrel thief is hard to stop, the detective gives Danny suggestions on the best ways to foil these clever critters.

Not all thieves in the animal world are sneaky. Some of them will rob you in broad daylight, like what happened to my friend Danny.

Danny: [on phone] Michael, I need your help. Me and my neighbors’ bird feeders are being robbed blind by a pack of squirrels! [to squirrels] Hey, you watch it!

Danny: How do we keep these punks out?

The easiest thing is to use food that squirrels don’t want — nyjer thistle seeds, or jalapeño suet in the winter.

Danny That’s great Michael, but my feeder is chock full of black-oil sunflower seeds. Only the best for my birds, you know.

Well in that case you’ll need more layers of security. First, hang the bird feeder on a tall pole away from your roof or trees — squirrels can jump 9 feet across, and they will if there’s a good snack waiting for them.

[Squirrel chewing on a nut]

Danny (on phone): Michael, my feeder is already up on a pole — the squirrels just shimmy up it like it’s nobody’s business!

Ah, how about a second line of defense: a squirrel baffle. It’s a big cone or tube on the feeder pole that blocks a squirrel’s path.

Danny: So that’ll keep my seeds safe for the birds then?

Well, mostly — a determined squirrel can make it past the tightest security. But there’s one last trick: you can set up a protection racket with your squirrel mafia. Leave the squirrels some cheap food, like dried corn, away from your bird feeder. Hopefully they’ll accept the bribe and choose the easy meal — and leave the feeder to the birds.