The Birds of Block Island - With Scott Comings 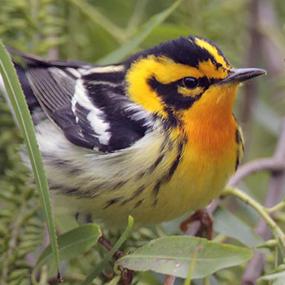 Scott Comings spent a lot of time on Block Island when he was growing up in Rhode Island. Today, as the associate state director of the Rhode Island chapter of the Nature Conservancy, Scott works to protect birds and nature — including the habitat on Block Island. BirdNote asked Scott if there’s a bird that still gets him really excited when he sees it. The Blackburnian Warbler (pictured here) first came to mind for Scott, but he admits that his favorite bird “probably changes every day.”

By Dominic Black, from an interview with Scott Comings

This is BirdNote, and I'm Dominic Black.

When I asked Scott Comings about the birds of Block Island, he laughed:

Block Islands ten miles off the coast of Rhode Island. Scott spent a lot of time there when he was growing up. And — he says — it's a magical place.

"And then going into June and July that's prime nesting season and we try to keep track of barn owl nests and norther harrier nests and piping plovers and other shorebirds."

Scott's doing this work day in, day out as Associate State Director with the Rhode Island chapter of the Nature Conservancy. So I ask him if there's a bird that still gets him really excited when he sees it…

"Well the one that's always great to see is the Blackburnian Warbler. To me I just love that bird, and to see it in the sun is really neat…I still take a lot of pleasure in seeing things like the Northern Harrier, Block Island's the last place that bird nests in the state. Pretty much any bird I see I really, really enjoy. You know my favorite probably changes every day."