Raptors’ nesting territories are based on the food supply 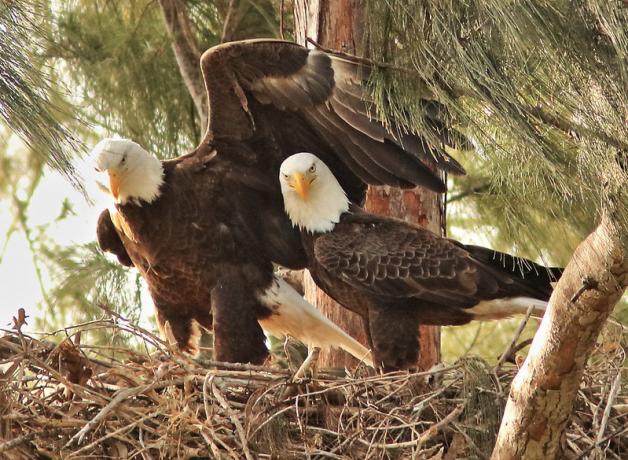 Red-tailed Hawks typically have a nesting territory of about a half-mile to a full square mile, depending on how much food there is. Bald Eagles’ nesting territories range from 2½ square miles to as much as 15 square miles, for the same reason. But the Gyrfalcons in Finland and Scandinavia really need their space!

Nesting Bald Eagles like their privacy. But how much space between one massive nest and the next can vary a lot, and it often depends on the food supply.

Bald Eagles nest near water to hunt fish and waterbirds. And their nesting territories range from 2 and ½ square miles to as large as 15 square miles, depending on how much food there is.

Red-tailed Hawks nest in diverse habitats, from forest edges to canyon cliffs. A pair will typically have a nesting territory of about a half-mile to a full square mile.

Gyrfalcons in Finland and Scandinavia really need their space. And once again, prey plays a crucial role. They feed on pheasant-like birds called ptarmigan. And ptarmigan numbers fluctuate so wildly from year to year that raising young Gyrfalcons is a real challenge. The last thing these birds need is competition from their neighbors. In one research area, their enormous nests were found—on average—just once every one hundred and seventy-five square miles. That’s like one nesting pair in the whole city limits of Chicago.