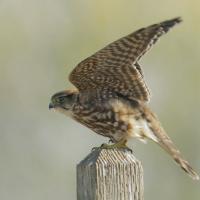 January 31, 2020 A Merlin — like this one — hunts boldly from a high perch. A Peregrine Falcon dives on a hapless pigeon, with an air speed approaching 200 miles per hour. The Gyrfalcon can fly down even the fastest waterfowl in a direct sprint. A Prairie Falcon blends in with its background. And the 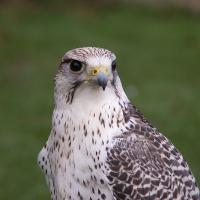 December 11, 2019 Gyrfalcons are the largest falcons in the world, with a wingspan of almost four feet and weighing almost five pounds. The name “Gyrfalcon” derives from an Old Norse word for “spear.” During the summer, you’ll find Gyrfalcons on the tundra, where they feed on arctic birds. But in the winter 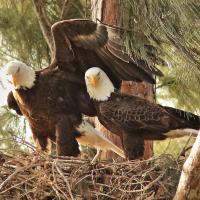 November 19, 2019 Red-tailed Hawks typically have a nesting territory of about a half-mile to a full square mile, depending on how much food there is. Bald Eagles’ nesting territories range from 2½ square miles to as much as 15 square miles, for the same reason. But the Gyrfalcons in Finland and Scandinavia 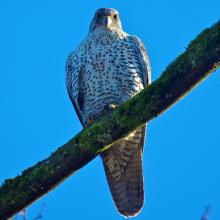