What falcon might spend the winter in your area? 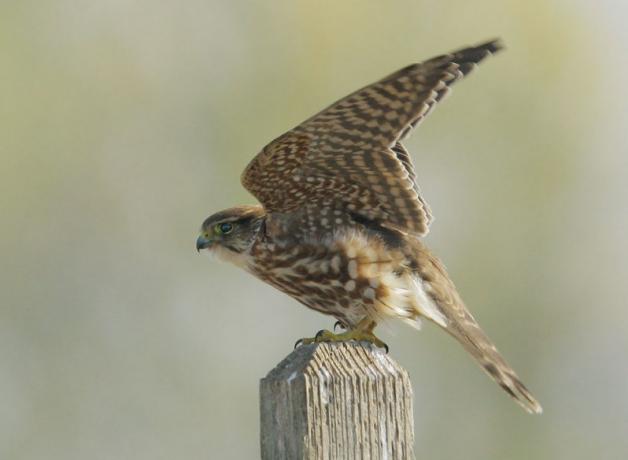 A Merlin — like this one — hunts boldly from a high perch. A Peregrine Falcon dives on a hapless pigeon, with an air speed approaching 200 miles per hour. The Gyrfalcon can fly down even the fastest waterfowl in a direct sprint. A Prairie Falcon blends in with its background. And the smallest North American falcon of all, the American Kestrel, hovers a field, watching for a mouse or large insect. You can find out where to find these birds at Cornell's All About Birds.

Hurtling through the air on blade-like wings, falcons rank among the fastest of all birds and the most adept at capturing prey in flight.

One falcon much more prevalent across the U.S. in winter is the Merlin. Ten inches tall with a two-foot wingspan, the Merlin chases down small birds from sparrows to sandpipers. [Merlin calling] Small but powerful, the fearless Merlin will buzz even a huge eagle that enters its airspace.

The majestic Gyrfalcon drifts south in winter to the northern tier of states. [Gyrfalcon calling] Larger than a Red-tailed Hawk, in a direct sprint the Gyrfalcon can overtake even the fastest duck.

The mid-sized Peregrine Falcon nests in some locales across the country, but its numbers are greatest in winter, especially near the coasts. During its dive on a hapless pigeon or Dunlin, a Peregrine may reach an air speed approaching 200 miles per hour. [Peregrine Falcon calling]

On a lucky winter day, you might see several species of falcons. To find out where, visit our website, BirdNote.org.

Did you know BirdNote delivers the wonder and joy of birds directly to your inbox? Sign up for our newsletter at BirdNote dot org to get a weekly preview of our shows, stories, photos, and more.