A field, blanketed in white! 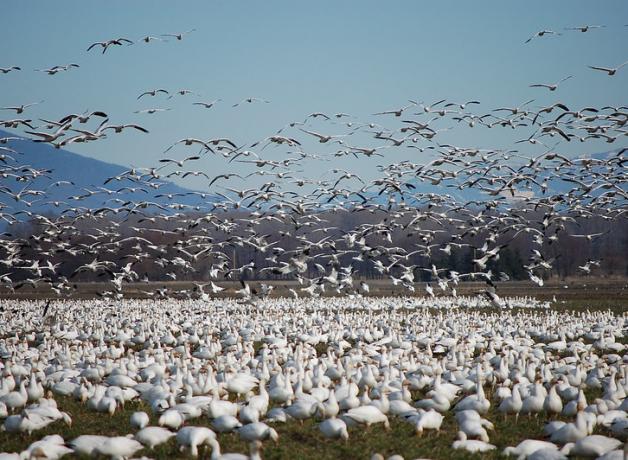 An immense field appears to be covered with snow, blanketed in white. But a closer look reveals more than 10,000 Snow Geese. Snow Geese nest on Wrangel Island, in the Chukchi Sea off northern Siberia. Don't miss the amazing video by Barbara Galatti!

If you'd like to make a gift to BirdNote, begin here. We thank you!

This wild sound — some liken it to the baying of hounds — pours from the sky each autumn along all four North American flyways. [Snow Goose flock calling loudly]

Millions of Snow Geese are returning from their Arctic breeding grounds, thousands of geese in any one flock.

Snow Geese fly high, a cloud of snowflakes against the blue, periodically stopping over en masse at staging points across the continent. They are bound for traditional wintering areas along the South Atlantic and Gulf coasts, and in the western states and Mexico. [Snow Goose flock calling loudly]

Imagine a visit to one of their wintering sites — whether it be the rice fields of southern Louisiana, the Skagit River delta in Washington State, or New Mexico’s Bosque (pronounced bahs-kay) del Apache preserve. As we look across a broad expanse of browns and greens, a pattern of dark soil interspersed with planted fields, our eyes come to rest on one field that appears snow-covered. A closer look reveals 10,000 or more white-feathered Snow Geese covering the field in one immense flock. [Snow Goose flock calling]

And listen, too, when a Bald Eagle flies over and the multitudes take flight in a spectacular avian blizzard, their joined voices all but deafening. [Snow Goose flock calling at even greater volume]

There’s a link to an amazing video on our website, BirdNote.org. I’m Michael Stein.