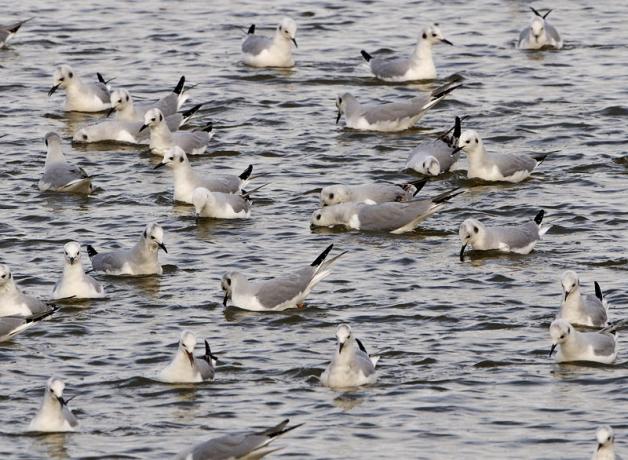 Small, tern-like Bonaparte's Gulls often form a chorus-line at the water's edge. Side by side, in half an inch of water, they stomp their feet as fast as they can. Under this pummeling, a smorgasbord of shrimp is stirred up for the gulls to harvest. Is this a learned behavior, or were these gulls born knowing how to forage cooperatively? Who knows? But it's hard to imagine a more nutritional dance routine!

The tide is part way out. Bonaparte’s Gulls, one of North America’s smallest, have formed a chorus-line at the water’s edge. Side by side, in half an inch of water, they’re stomping their feet as fast as they can. This stirs up an abundance of tiny marine invertebrates, including a smorgasbord of shrimp. [Calls of several Bonaparte’s Gulls]

Is this a learned behavior, or are the gulls born knowing how to forage cooperatively? Most likely, it’s innate, but no one knows for certain.

The Bonaparte’s Gulls have returned from the boreal forest of the north where they nest in trees. Trees? Yes, they’re the only gull that regularly does that. Now, as they migrate south through the Mississippi flyway and along both coasts, they’re amassing in large flocks. [Calls of several Bonaparte’s Gulls]

The head of the adult is still black – like a vanilla cone that’s been dipped in very dark chocolate. But soon, it will begin a gradual transition back to the white head of winter. [Call of a single Bonaparte’s Gull]

This one gull you’re never going to see in a garbage dump. Bonapartes find food in several ways, but not by picking through trash. Why should they, when they have such a nutritional dance routine! [Repeat chorus-line music]

To share today’s show with a friend, begin at our website, birdnote.org. [Go out with the Can-Can] 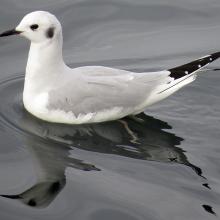