Call of the Sage-Grouse

Up close with their otherworldly mating ritual 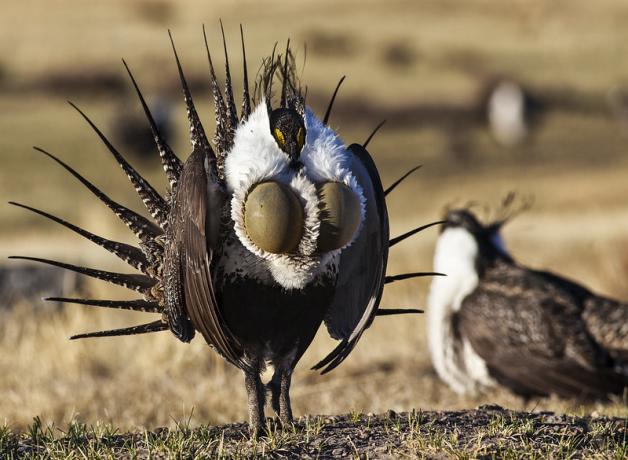 In the Red Desert of Wyoming, Erik Molvar takes us up close and personal with a Greater Sage-Grouse mating site, known as a lek. “Anybody who’s ever been to a singles bar will recognize this scene,” Erik says. “The males are puffing out their chests, strutting around, trying to catch the female’s eye.” Listen to hear what their otherworldly “pick-up line” sounds like!

Call of the Sage-Grouse

Today, we’re at a Greater Sage-Grouse lek, or mating site, in the Red Desert of Wyoming. Erik Molvar is our guide. He's the executive director of Western Watersheds Project.

Erik Molvar: It’s 5:30 in the morning and already the sage-grouse are taking positions on the lek. Anybody who’s ever been to a singles bar will recognize this scene. The males are puffing out their chests, strutting around, trying to catch the female’s eye, and this is what their pickup line sounds like.

[Gorgeous burbling calls in the clear]

And when they inflate their chest sacks, bright yellow sacks of skin can be seen. Looks like eggs frying in a skillet. The females, by contrast, are brown camouflage. They have their pick of the most attractive mates so they don’t have to show off.

Now there’s a male making a rush at a lesser competitor.

These two are threatening again. They do come to blows over these little 10x10 patches of territory on the dance floor.

You can hear the coyotes calling to each other. They don’t bother the sage-grouse.