Chickadees on a Cold Night - Interview with Susan Sharbaugh 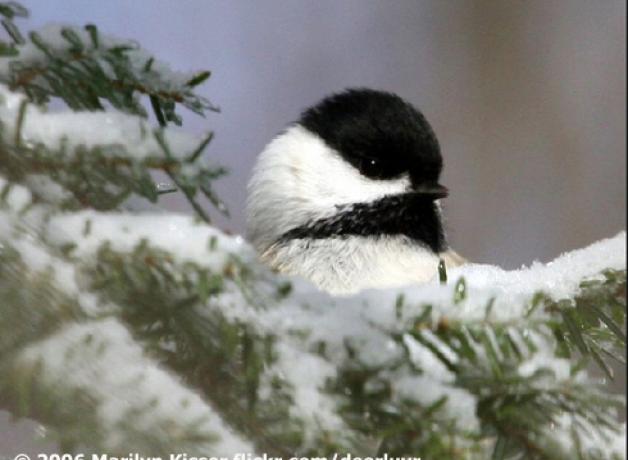 The Black-capped Chickadees of Fairbanks, Alaska, endure nights as cold as 40 degrees below zero. Dr. Susan Sharbaugh, a scientist at the Institute of Arctic Biology at the University of Alaska Fairbanks, has studied them. She says that each chickadee wedges itself into a tiny cavity. Then the birds drop their body temperature 18 degrees and shiver all night to generate heat.

Chickadees on a Cold Night -- Interview with Susan Sharbaugh

[Calls and chatter of Black-capped Chickadees]

Every adult chickadee you see in the spring had to survive the winter. Some, like the Black-capped Chickadees of Alaska, endure nights as cold as 40 degrees below zero. [Cold winter wind] How do they do that?

We called Dr. Susan Sharbaugh, [Shar-baugh] a scientist at the Institute of Arctic Biology at the University of Alaska Fairbanks:

“Well I’ve been studying chickadees and watching their behaviors thinking about their physiology for about twenty years now. And one of the things that really intrigued me was where they spend the night. And I haven’t been able to find that until recently, when I was able to put radio transmitters on some birds and follow them where they roost at night. And what I found was that these birds, just as it’s getting dark, wedge themselves into little tiny cavities in birch trees… And after they get in there, what we think happens is that they puff up their feathers to increase their insulation and then drop their body temperature 18 degrees and then shiver all night to generate heat.

How they do that is that is during the day, they forage around on the trees, looking underneath bark for overwintering insects, and they also cache in the fall, so they have a known source of seeds and insects that they’ve put away in the fall, so that’s what they burn overnight.”

[Susan knows their cavities are tight, because she’s seen some at her feeder in the morning with bent tails.]

No wonder they’re singing in spring!