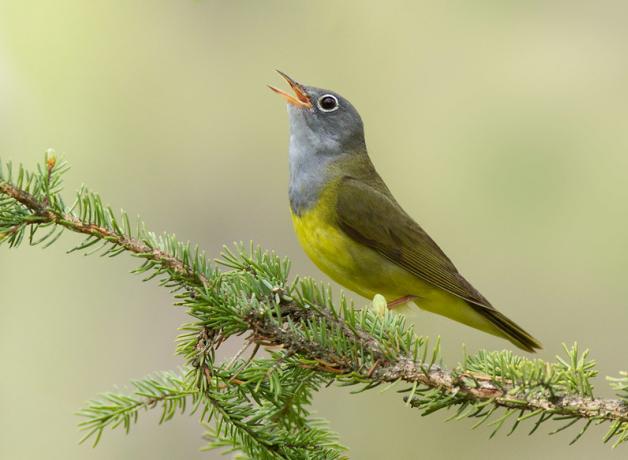 Connecticut Warblers nest in the northern boreal forests, migrate through the Midwest, and winter in the rainforests of South America. Even with all that traveling, you rarely see one of these birds. Though their loud, ringing song might be easy to identify, it often seems to emanate from low in a tree when the warbler is perched high in the crown, frustrating birders from Canada to Brazil.

This is BirdNote.
[Connecticut Warbler, ML 10074, 0:45 ff.]
It’s incredibly challenging to spot a Connecticut Warbler. It’s not that the bird is especially rare or its range is especially narrow. It isn’t restricted to rugged, remote wildernesses. This relatively big, slow-moving warbler just keeps a low profile -- whether it’s nesting in the boreal forests, wintering in the forests of South America, or migrating between the two.
The best way to track down a Connecticut Warbler is by listening for its loud and distinctive song.
[Connecticut Warbler, ML 10074]
But even singing birds on the breeding grounds can be tricky to spot. Observers in the north woods of Minnesota regularly find themselves swatting black flies for an hour or more before seeing so much as a brief glimpse of this bird as it struts across the forest floor.
When it does perch deep in a small spruce or tamarack to sing, the Connecticut Warbler carefully conceals itself before making a peep.
And even the call itself makes it hard to pinpoint the bird -- it often sounds like the bird is calling from low in a tree when it’s actually perched high in the crown.
[Connecticut Warbler, ML 10074]
It takes more than a little luck for intrepid birders to train their binoculars on this songbird.
Today’s show brought to you by the Bobolink Foundation.
Find us at BirdNote.org.