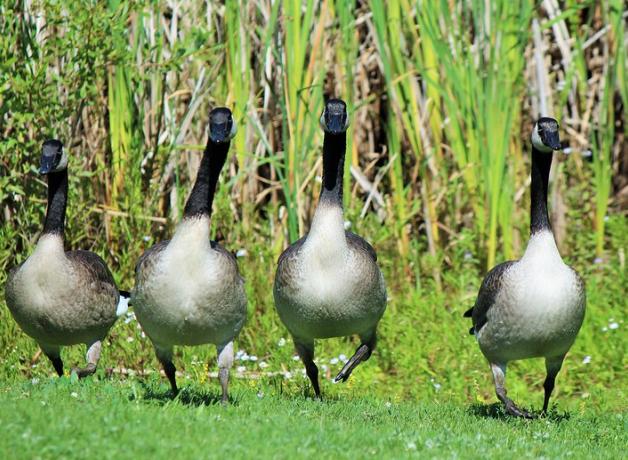 Everybody’s heard of a gaggle of geese and a covey of quail. But what’s a group of penguins called? And a “conspiracy” of ravens? Maybe the way we label birds says more about us than it does about them.

When birds get together, we humans have a knack for assigning them some clever and unusual names.

Most of us know the common ones… a covey of quail, a parliament of owls, a gaggle of geese.

But what about a group of penguins? Well, it depends. On land they’re called a waddle or sometimes a huddle. But on the water, they’re a “raft” of penguins.

Here’s another: a charm of hummingbirds. Take the Anna’s Hummingbird --

The way its iridescent plumage catches the sun, it’s like a flying jewel, darting from flower to flower. *Now, you’re not likely to see hummingbirds in groups in the wild, but the whole picture is charming, indeed. [Bzzz! Bzzz!]

A convocation of eagles.

Does that sound “stately” to you?

What about a conspiracy of ravens. Are they truly conspiring about something? Or do we just perceive them as untrustworthy?

Maybe the way we label birds says more about us than it does about them.

More collective nouns for animalsA Murder, a Party, a Stare, or a SiegeFun facts about penguins