The Crow and the Gull

What's that crafty bird up to? 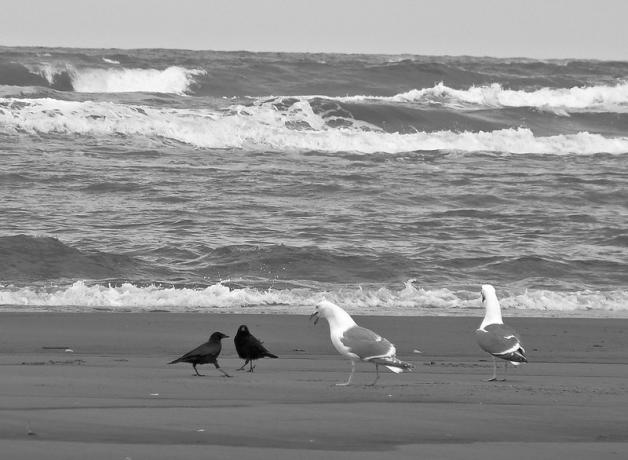 Crows and gulls are opportunists - grabbing a bite wherever, whenever, however they can. Listener Nick Woodiwiss of Vancouver Island, British Columbia, wrote to BirdNote about a funny scene between an American Crow and a Glaucous-winged Gull on the beach. It seems that crows and gulls are frequent adversaries! Can you guess who won?

The Crow and the Gull –
A Listener’s Story

[Sounds of Glaucous-winged Gulls and crows]

Listener Nick Woodiwiss of Vancouver Island, British Columbia tells this amusing story: [waves at the edge of the beach]

“I walk nearly every day, along the beach and on the forest trails. One time last fall when the tide was low, a group of gulls and crows were on the beach, mooching about, looking for what had been washed up. I saw an immature gull feeding on a dead crab. Evidently a crow saw it, too.

“As I watched, the crow hopped up behind the gull. As crows do, it turned its head to one side in an "Hmmm, what have you got there?" type of look. Then, the crow reached out with its beak, pulled on one of the gull's tail-feathers, and immediately hopped backwards. The gull turned around to see what had touched it. The crow looked away, all innocent.   [light waves lapping]

The gull went back to the crab shell, and the whole scene was repeated. But this time when the gull turned around, the crow was quite a way behind and to the side of him. The crow was making a big fuss — digging in the sand for some hidden treasure.  The gull became intrigued by what the crow was after and moved over to have a look. In a flash, the crow hopped up and grabbed the crab shell!” [Bill clapping of American Crow]

Thanks, Nick! Great story. And for BirdNote, I’m Mary McCann.