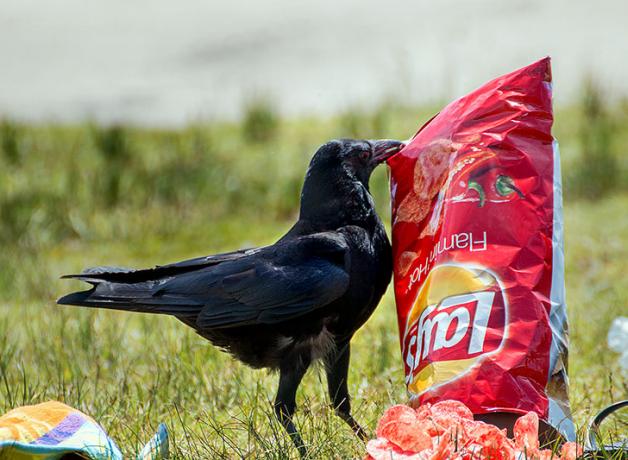 Crows didn't get where they are today by being shy or slow. They take advantage of whatever food they find, where and when they find it. Listener Jerry Campbell told his story of one crow making off with three chips. Be sure to watch the video of another clever crow in Japan -- in Sights and Sounds below.

Sign up for the BirdNote podcast, and listen to BirdNote any time, night or day.

BirdNote®
Crows 'n' Chips
Written by Ellen Blackstone
This is BirdNote!
Crows didn’t get where they are today by being shy or slow. [Caw, caw] They take advantage of whatever food they find, where and when they find it. BirdNote listener Jerry Campbell describes what he saw.
[Scrunching of a chip bag] Picture three tortilla chips lying on the grass, several feet apart. And in flies a crow. [Caw, caw]
For a crow to eat one chip on the spot is risky. First of all, when he bites into it, it crumbles into tiny bits. Not a problem for a human who can pick up the pieces with his fingers, but not so easy for a crow using only its beak as a utensil. Besides, another crow might spot him eating his first chip and come in to steal one of the others. What to do? What to do? [Caw, caw]
The crow looked around. Ahh! No beady eyes watching. He strutted over to the chip on the left and carried it back to the chip in the middle, placing it carefully on top. He hopped over to chip #3 on the right and walked it back and placed it on the stack.  Then turning his head slightly sideways, the crow picked up the whole stack and flew off to eat his chips in peace.
A caws—so to speak—for celebration. [Caw, caw]
I’m Mary McCann.
###
Bird sounds provided by The Macaulay Library of Natural Sounds at the Cornell Lab of Ornithology, Ithaca, New York. Call of American Crow recorded by G.A. Keller.
BirdNote's theme music was composed and played by Nancy Rumbel and John Kessler.
Producer: John Kessler
Executive Producer: Chris Peterson
© 2013 Tune In to Nature.org    November 2017 / 2020  Narrator: Mary McCann
ID#    110907chipsKPLU       AMCR-06b