Do Parrots Name Their Chicks?

A different kind of “name tag” 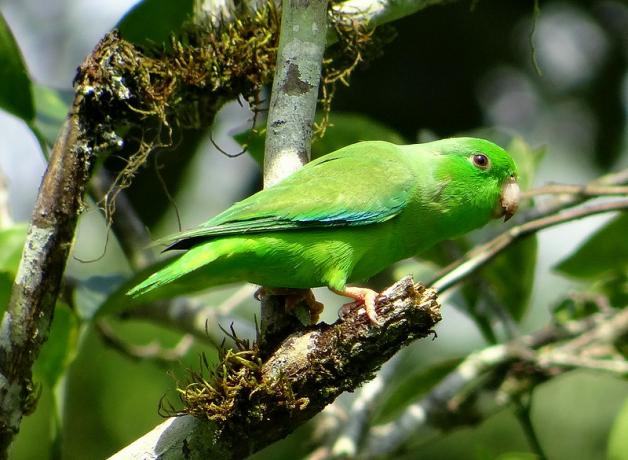 Parrots are among the smartest of birds. But are they clever enough to know each other by name? Research conducted by ornithologist Karl Berg suggests the answer might be yes. Berg’s studies of Green-rumped Parrotlets — such as the one pictured here — indicate that every parrot in a family flock has a distinct vocal signature learned from its parents. When others in the flock hear it, they know precisely who’s calling.

Do Parrots Name Their Chicks?

Parrots are among the smartest of birds. But are they clever enough to know each other by name? Ornithologist Karl Berg has studied vocal learning in Green-rumped Parrotlets in Venezuela for years – and his research published in 2011 suggests the answer might be yes. [Green-rumped Parrotlets calling, http://macaulaylibrary.org/audio/64385, 0.08-.10]

The chicks of Green-rumped Parrotlets appear to learn specific building blocks of sound from their parents and then help pass these down to younger siblings. Each chick customizes the sounds it’s learned, so its call is slightly different from that of its sibling. That means, each parrot in the family flock has its own distinct vocal signature, so when others in the flock hear it, they know precisely who's calling.

To make sure that chicks were really learning from parents and siblings, rather than just being born with these calls, Berg switched eggs among different nests as they were laid, ensuring that parents raised offspring other than their own. His results showed that chicks learned sound elements directly from the foster parents.

So, while you couldn’t say that parrots name their chicks, vocal signatures truly are learned in the nest. And Green-rumped Parrotlet chicks create their own, unique nametags.