The Bald Eagle's success means trouble for some other birds... 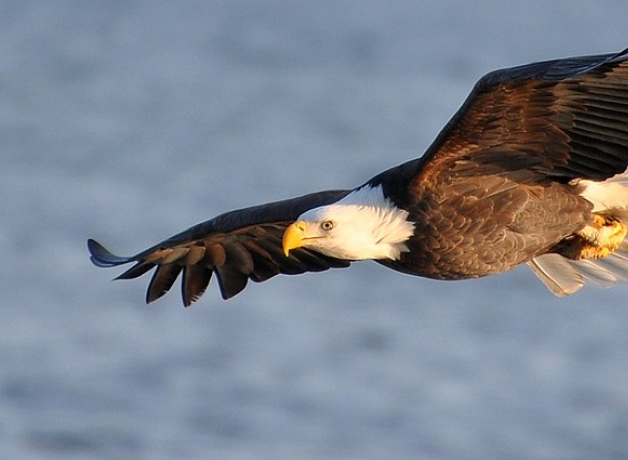 While the Bald Eagle may be the biggest story of conservation success in the 20th century, it's made life tough for some colonial seabirds. All the eagles have to do is soar by the cliff, and it causes panic, scaring birds off their nests. Then gulls and crows swoop in and get the eggs. The eagles take chicks as well. But according to Dr. Julia Parrish, Common Murres have adapted to some extent. They've learned to hide their nests beneath brush and have reproduced more successfully.

This is BirdNote.
[Calls of Bald Eagles in deep forest ambient]
Some call the recovery of raptors, such as these Bald Eagles, the biggest story of conservation success in the 20th century. Since the banning of the pesticide DDT in 1972, raptor numbers have rebounded. The poison, which eagles ingested with their prey, made the birds’ eggshells so thin they broke during incubation. The eagles’ recovery is nowhere more dramatic than along the rugged Pacific coast of Washington State.
[Sound of ocean waves breaking]
While the Bald Eagle’s resurgence is good news for many, it’s making life tough for colonial seabirds that nest in the same region.
[Sound of seabird nesting colony – Common Murre]
According to University of Washington professor Julia Parrish, “Eagle disturbance has been changing the face of breeding colonies, as eagles have literally scared murres, cormorants, and gulls into low breeding success.” 1
All the eagles have to do is soar by the cliff, and it causes panic. The seabirds desert their nests, and then gulls and crows swoop in and get the eggs. Eagles take chicks as well.
But nature has a way of bringing predator-prey relationships into balance. In 2007 and 2008, researchers led by Dr. Parrish found that eagles caused murres to “abandon their nests without producing any young. But by 2009, the murres had adapted. They hid their nests beneath brush” and reproduced more successfully. 2
[Calls of Common Murre parent and chick]
For BirdNote, I’m Michael Stein.
###

1 Personal correspondence with Julia Parrish, March 2010
2/ Isabelle Groc, “New World Order: When the Recovery of One Species Endangers Another”. High Country News. March 1, 2010. pp 8 & 9.
Reference is to research on Tatoosh Island off the Washington coast