It takes a big, strong nest to support a family of eagles! 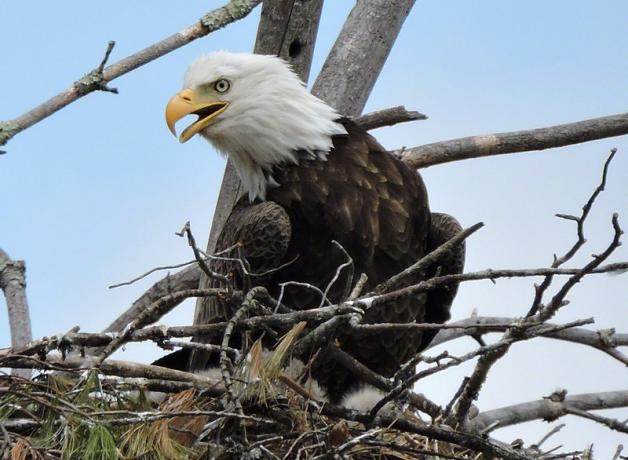 Bald Eagles build large stick nests in tall trees. These nests endure rough treatment. Rambunctious chicks pull sticks out and flap madly, holding on with their feet, before they fledge. Wind buffets the nest year round. But eagles reuse their nests year after year. Adult eagles break off dead limbs and carry them back to their nests. Bald Eagles have been known to carry sticks more than a mile to their nest.
Don't miss this video -- a pair of eagles rebuild, (almost) live!

This is BirdNote! [Bald Eagles calling]

That odd call that sounds like a rusty gate? We’re actually hearing a pair of Bald Eagles, and they’re getting ready to nest. [More Bald Eagle calls]

Bald Eagles build large stick nests in tall trees, which they use year after year. And these nests endure rough treatment.

Young eagles [Juvenile Bald Eagles] perch on the edge and flap their wings while holding on with their feet to avoid premature departure. This upward tugging can pull apart sections of the nest. The young birds may also yank at sticks with their beaks and chuck them over the side. Weather and wind take their toll, too. [More adult Bald Eagle sounds]

So every year, the eagles have to rebuild their bulky nests. An eagle looking for material may fly at a dead branch that’s still attached to a tree. Coming in feet first, the bird hits the branch with its talons and, using its forward momentum, breaks off the limb. [Loud crack] The eagle then carries the branch, often up to five feet long, back to the nest and wedges it in. And here’s something amazing: Bald Eagles have been known to carry sticks more than a mile to their nest.* [More adult eagle sounds]

BirdNote is also available as a podcast.  Find out more when you visit our website, BirdNote.org. I’m Michael Stein.