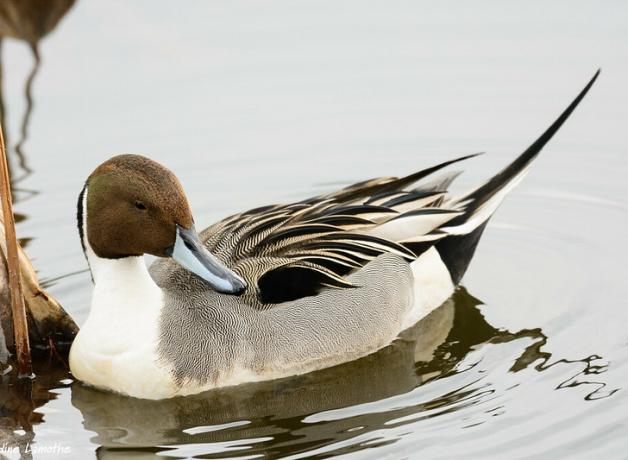 Northern Bobwhite ... Evening Grosbeaks ... Boreal Chickadees ... Common Terns ... and Northern Pintails, like this one ... the populations of all are in decline, mostly due to habitat loss. On Earth Day, join those who are finding ways to conserve the natural resources that sustain the full community of life, for people and birds. Join your local Audubon. Volunteer to help remove invasive plants. Visit a national park or refuge. Buy a Duck Stamp. There are many ways to get involved and help #BringBirdsBack!

Earth Day -- and Beyond!

This is BirdNote.
These birds are but a few of those in steep decline, some more than 80% from their numbers just 40 years ago.
Northern Bobwhite [Call of Northern Bobwhite] – chubby quail - prefer grasslands in the eastern states…
Evening Grosbeaks [Song of the Eastern Grosbeak] – robin-sized birds, frequent the boreal forests of Canada and the mountains of the western United States during spring and summer….
Northern Pintail– slender and elegant ducks - seek shallow ponds and wetlands throughout the Northern Hemisphere….
[Call of Northern Pintail, and splashing if possible]
Boreal Chickadees…send their wheezy calls through dense coniferous forests as they flit from tree to tree – [call of the Boreal Chickadee]…
Common Terns migrate along both coasts and through the interior to their nesting grounds in Canada from their winter home in the tropics [call of the Common Tern with that lovely water ambient]…
This Earth Day, join those who are working to conserve the natural resources that sustain the full community of life, for people and birds. You’ll find lots of great ways to help on our website, BirdNote.org.
[Dawn chorus]
For BirdNote, I’m Michael Stein.
### 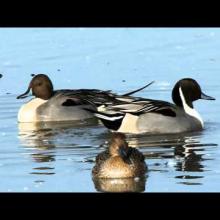