From Egg-laying to Hatching and Beyond 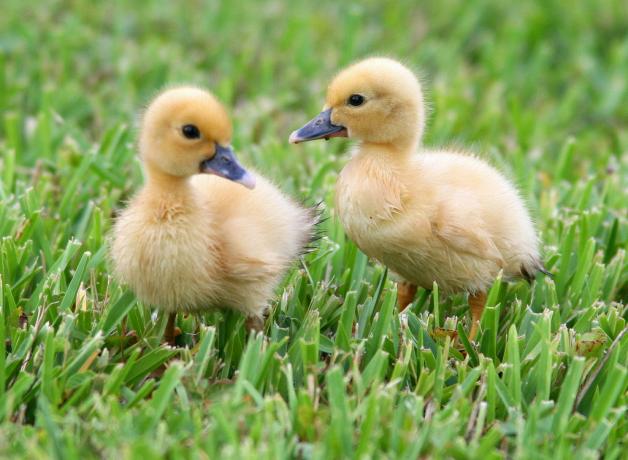 Waterfowl like this Muscovy duckling spend up to 30 days in the egg, so they’re able to walk, swim, and feed themselves as soon as they hatch. We call these chicks precocial. By contrast, the chicks of most songbirds spend less time maturing in the egg. They must continue to develop in the nest before heading out on their own. We call these hatchlings altricial since they depend on their parents to care for them.

From Egg-laying to Hatching and Beyond

Laying and incubating eggs is serious business for wild birds.

Some birds, such as swifts and albatrosses, lay only one egg. For ducks and quail, ten to twelve isn’t uncommon. The female of these species lays one egg per day until the clutch is complete. And the parents wait for at least half of the clutch to be laid before they begin incubating.* That’s so all the eggs will hatch about the same time – a process that can take as few as 11 days to as many as 11 weeks.

[Waterfowl on a pond]

Duckings, goslings, and other waterfowl spend up to 30 days in the egg, so they’re able to walk, swim, and feed themselves as soon as they hatch [peeping of Canada Geese goslings]. We call these chicks precocial, because they seem to be mature beyond their age, like precocious children.

By contrast, the chicks of pigeons, robins, and most songbirds spend less time—perhaps only two weeks—maturing in the egg. [Rock Pigeons cooing] They hatch blind, naked, and helpless and must continue to develop in the nest before heading out on their own. We call these hatchlings altricial—needing to be nourished—since they depend upon their parents to feed and protect them.

Precocial or altricial – what were you?

* It can happen that 16 eggs are laid. Do parents leave the eggs exposed for up to 16 days until the last egg is laid? BirdNote Science Advisor, Dennis Paulson, Ph.D. says: “Some birds do wait. Chukars, with notoriously large clutches, wait until the last egg is laid before they incubate. Mallards begin to incubate some time in the middle of laying their 10-12 eggs, slowly increasing their time spent on the nest as the eggs are added. Yet the hatching only occurs over no more than a single day. Pretty fancy system. So both of those species do have synchronous hatching, so important in precocial birds that leave the nest within 24 hours of hatching. American Coots begin incubating some time during the middle of laying, and their eggs don’t hatch synchronously. Apparently they can manage to keep the early-hatching young together at the nest until they all hatch. So the statement is OK, with caveats. I should add that very few individual females lay as many as 16 eggs, but it does happen. Up to a dozen is more common.”

Muscovy Duck – More at All About Birds