Flying with Birds and Bats

There’s more than one good way to fly! 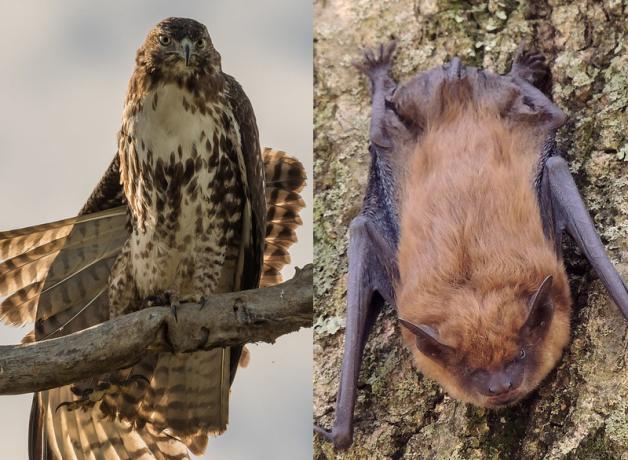 Bats and birds have evolved very different ways of flying. Birds have stiff feathers projecting from lightweight, fused arm and hand bones; bats have flexible wings of membranes stretched between elongated fingers. While birds use the strong downstroke of their wings to fly, bats support their weight on the upstroke, too, by twisting their wings backward. Bats tend to be more agile in flight, while many birds can fly with greater speed.

Flying with Birds and Bats

In the long history of life on earth, vertebrates evolved powered flight just three times. Among reptiles, the now-extinct pterosaurs. Among mammals, the bats. And – of course – birds.

Bats and birds have evolved very different ways of flying. This starts with wing structure. A bird like the Red-tailed Hawk, for example, has stiff feathers projecting back from lightweight, fused arm and hand bones. The Big Brown Bats, found hunting for insects above many neighborhoods, have flexible wings of membranes stretched between elongated fingers.

While the hawk uses the powerful downstroke of its wings to fly, the bat supports its weight on the upstroke as well, by twisting its wings backward.

Bats appear to row through the air, flexing their wings like we use our hands to swim. They can fold their wings into different shapes to change direction suddenly to catch flying insects.

Although their agility in flight is no match for a bat’s, many birds fly with much greater speed. The hawk can flex its wings into a tight aerodynamic shape to swoop down on prey.

Both of these highly evolved groups of vertebrates have been very successful, and together prove there is more than one way to fly.