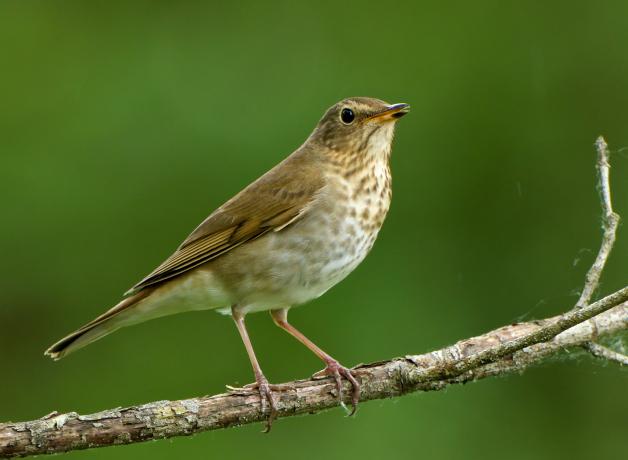 Scientists have found that, at least for some species, a bird’s genes dictate the route it takes when it migrates. For instance, when subspecies of Swainson’s Thrushes interbreed and produce hybrid offspring, those young birds may take mom’s route north and dad’s route south or zigzag between the different paths. Researchers using new DNA techniques have discovered that a cluster of genes on a single chromosome seems to determine migratory patterns.

This is BirdNote.
[Swainson’s Thrush song, https://macaulaylibrary.org/asset/133353 ]
In the Canadian province of British Columbia, there are two distinct subspecies of Swainson’s Thrush nesting there each summer. The russet-backed thrushes migrate south through the Pacific region to winter in Central America. The olive-backed thrushes migrate southeast to Florida and nearby states before flying on to South America.
[Swainson’s Thrush calls, https://macaulaylibrary.org/asset/130994 1:31]
Where the two kinds of thrushes overlap, sometimes they interbreed. When these mixed offspring migrate, they take a variety of routes: some zigzag west and east while heading south; others take mom’s migratory route in the fall and dad’s in the spring, or vice-versa. Some will even go right down the middle.
[Swainson’s Thrush calls, https://macaulaylibrary.org/asset/130994 1:39]
Scientists have long known that heredity helps shape migration routes. But researchers using new DNA techniques have shown that a set of about 60 genes on a single chromosome is responsible for the different migratory patterns.
Any changes within this gene cluster can produce widely different migratory patterns—and may influence the evolution of new species.
For BirdNote, I’m Michael Stein.

Genetic Basis For Epic Songbird Migration UncoveredSongbirds' epic migrations connected to a small cluster of genesWhy some Swainson's Thrushes migrate twice the distance as othersWhen Mom and Dad Have Different Migratory Routes, Kids Fly Right Down the MiddleThe genetic makeup of a Willow Warbler determines where it will migrate when wi…